‘Man of the Woods’ should stay in the forest

Fair use from RCA Records

Inspired by his Nashville-roots and newfound Montana lifestyle, Justin Timberlake’s fifth studio album, “Man of the Woods,” is a polished re- hash of JT’s signature funky sound infused with spoiled “Americana” cheese. I dare you to listen to it through in full.

While its title screams country-comeback, “Man of the Woods” is not Timberlake’s attempt at switching genres.

The album, crafted in part by mega-producers Pharrell Williams and Timbaland, leans R&B and paints Timberlake as a cross between a thirty-something Urban Outfitters employee who’s obsessed with Polaroid cameras and the guy who thinks everyone at the campfire secretly wants to hear him play the guitar (they don’t). In short, Timberlake is no cowboy.

Rather, “Man of the Woods” is like the folky cousin of Timberlake’s previous release “20/20,” but luckily, the album’s ingenuine swagger and blatant mediocrity are more tolerable in smaller doses –– many songs on “20/20” were unbearably long.

Glancing at the cheesy song titles may discourage some listeners from playing the album, but “Man of the Woods” is not entirely cringe-inducing. “Midnight Summer Jam,” “Man of the Woods,” “Morning Light (feat. Alicia Keys)” and “Supplies” are the album’s better tracks, but following an exhausting hour-long listen, not one track felt like a clear standout or smash-hit waiting in the wings. 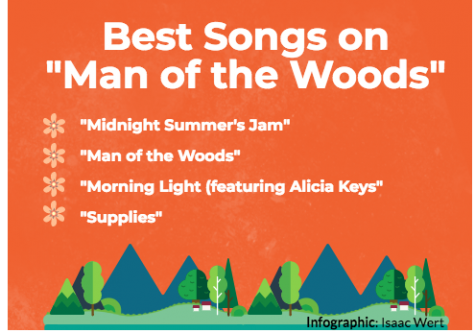 “Filthy,” the album’s lead single, is the most mainstream track on the album, and while its wobbling bassline muffles Timberlake’s voice, it can’t mask his abysmal lyrics. In fact, the lyrical content throughout the album is unoriginal and uninspired. It’s a wonder some lines ever escaped the cutting room floor.

However, none of the album’s faults are at the hands of its producers, Pharrell Williams and Timbaland. The production is solid throughout, but with “Man of the Woods” being Timberlake’s fifth album with these producers, it’s blatantly clear he is running in circles with his current production team. Looking forward, Timberlake needs not a new image, but an entirely new sound to defibrillate public attention.

Masquerading his old tricks in trees and twang, Timberlake’s “Man of the Woods” is a dreadful listen that borders on parody-levels of absurdity. Needless to say, I can’t in good conscience recommend anyone to listen to this record.

However, for those intrigued by Timberlake’s hipster lumberjack aesthetic and appreciate his signature brand of “dad-swag,” “Man of the Woods” is currently available for purchase and streaming on all media platforms.