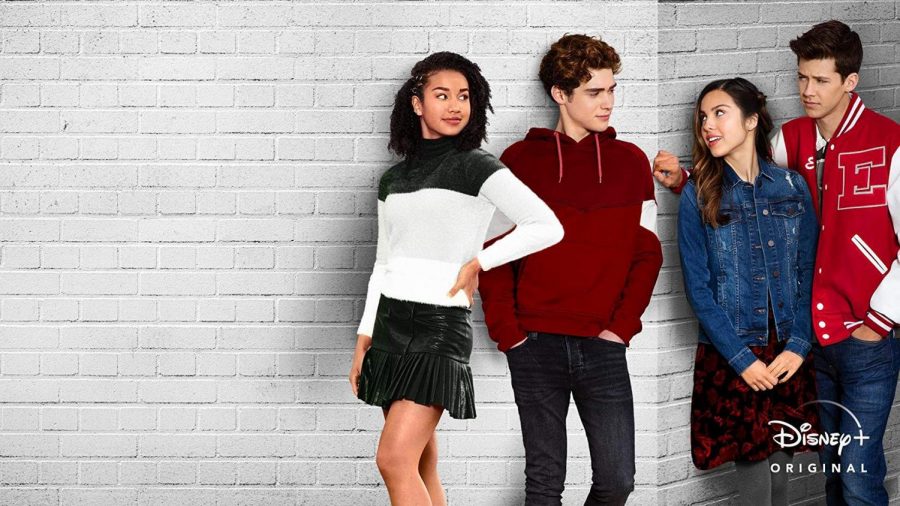 Fair use from Disney+: Main cast members of "High School Musical: The Musical: The Series" pose for the main poster. From left to right there is Gina (Sofia Wylie), Ricky (Joshua Bassett), Nini (Olivia Rodrigo) and EJ (Matt Cornett).

Like the rest of us, I was slightly worried to watch this new Disney+ original series. The original “High School Musical” trilogy is a childhood classic to any 2000s kid, and I assumed this reboot of sorts was going to be an apathetic cash-grab to profit off of the fame of the source material. However, “High School Musical: The Musical: The Series” has turned out to be shockingly self-aware and clever in its handling of original movies.

From the first episode to the last, “High School Musical: The Musical: THe Series” is both goofy and relaxing to watch, with a (for the most part) incredibly talented cast, amazing new (and old) songs, as well as cute, albeit sappy writing. The show follows a new group of characters putting on a stage production of “High School Musical: The Musical” at the high school that the original movie was filmed in, East High. Instead of existing in the same universe as the original films, this series acknowledges the fame of “High School Musical,” which made it more interesting and unique to watch. The show also is filmed mockumentary style, with each character stepping aside to talk to the camera and explain how they are feeling. It felt as if the writers and actors all knew the concept for this show was a little silly, and they successfully ran with it.

The two stars of the series, Nini (Olivia Rodrigo), who plays Gabriella in the musical, and Ricky (Joshua Bassett) who plays Troy shine in every episode. With equally talented and unique voices, they were a joy to watch on screen. Other stand out cast members include Julia Lester in her role of Ashlyn and Dara Renee who plays Kourtney. Comparatively subpar actor Matt Cornett who plays EJ left me a little underwhelmed while standing next to his castmates. His vocals and acting chops are noticeably weaker, which stuck out in the sea of talent.

From the title of the show to the lines within it, the script seemed very intentional, even in the cringiest of moments. The writers are clearly aware the show they made could never replace the original “High School Musical.” It feels as if they are laughing alongside the audience as we go on a trip down memory lane listening to the nostalgic and upbeat music from the original soundtrack.

This series doesn’t try to be the new “High School Musical,” instead, it pays homage to the iconic Disney Channel original movie and leaves myself and others wanting more, even if it is a guilty pleasure.