Recommendations from a variety of genres 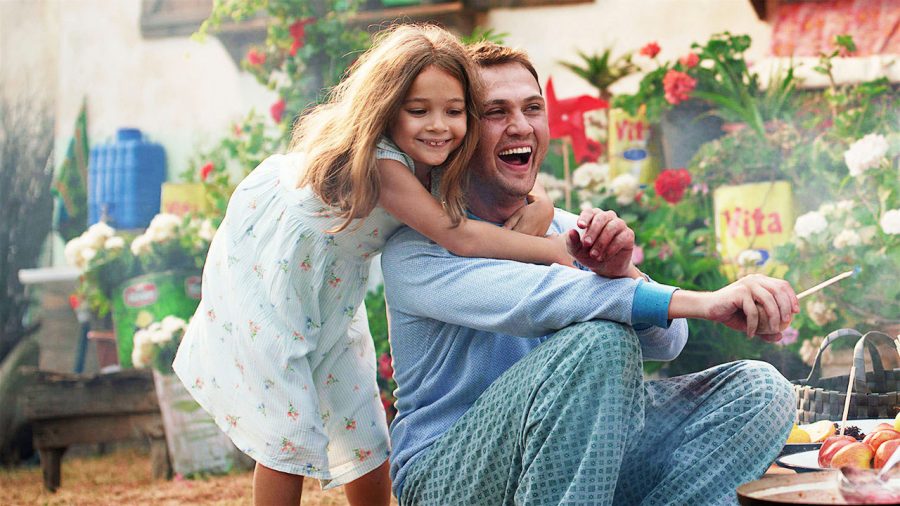 Fair use from Netflix. Daughter Ova (Nisa Sofiya Aksongur) hugs her dad Memo (Aras Bulut iynemli). Memo, with an intellectual disability, ends up being jailed for a crime he didn’t commit and must prove his innocence in order to be with his daughter.

This movie follows Quan Ngoc Minh (Jackie Chan), a man who owns a Chinese restaurant. One day Minh’s daughter ends up being killed by one of the men who bombs a clothing store as part of a terrorist act. Minh then sets off on a journey looking for the killers to seek revenge for his daughter. This film features a lot of action and violence, including physical fighting and bombings. However, in most scenes there is a lot of dialogue between characters, making it slow at times. Overall, the movie makes the audience want to see what Minh’s next move will be and who will be his next victim.

“Miracle in Cell No. 7” is a sad tale revolving around a father and daughter who have a strong bond together. The father, Memo (Aras Bulut Iynemli), ends up being put in jail cell number seven because of a crime he didn’t commit. Throughout the movie, you get to learn some of the backstories of his fellow inmates.This film will make you cry, as you get to see how strong love and friendship truly are. The movie captures the power of redemption, as the characters want to escape the life of crime.

“Inception” is a mind-blowing film following Dom Cobb (Leonardo DiCaprio), a man who is ordered to implant an idea inside the mind of Robert Fischer (Cillian Murphy), CEO of Fischer Morrow. This film will have you gripping your seat throughout the entire movie. Cobb and his group will stop at nothing to be successful, but one very important enemy of Cobb could get in the way of their plan. They must fight against the enemy of Cobb who lives on in his memory, which complicates the mission they were assigned to. Cobb and his group need to complete their mission in time, as this mission could be the last chance of redemption for Cobb being able to let go of his past memories. This film will have you wondering what’s real. Is Cobb dreaming or is this reality?

“Avengers: Infinity War” revolves around a group of super-powered individuals who gang up on a mission to try and defeat Thanos (Josh Brolin), a supervillian from Titan. The heroes throughout the film try to stop him from attaining the six infinity stones, which are powerful enough to wipe out half of the earth’s population. The film is filled to the brim with action sequences, as they try to find and stop Thanos before he can destroy millions of lives. This movie also features some funny moments along the way that will make people laugh, as the heroes head into a long and hard journey. It’s a movie worth watching.

This sci-fi/thriller is set in a society where some people possess powers and are considered outcasts. They are called “freaks” and struggle to fit in with the rest of the world. The father Henry Lewis (Emile Hirsch) and daughter Chloe Lewis (Lexy Kolker) get stuck in their house for many years, as the dad is unwilling to let his young seven year-old go out into the real world. However, throughout the film, she builds up the courage to go outside and meet other people. Then Lewis goes to look for her mom, Mary Lewis (Amanda Crew), who she has always wanted to meet. To find her mother, she must solve a difficult mystery. With the help of her grandfather (Bruce Dern), her eyes are opened to the world around her and shows her what she is capable of doing. In this movie we can see there is prejudice against people with supernatural powers. It has scenes of violence and some moments will leave you in shock. Although the film starts off slow, towards the end, there are a lot of things going on at once which will have you on the edge of your seat.

The gripping dystopian film “What Happened To Monday” emphasizes action early on. To control the population, the government sets a one-child policy per family, and if lawbreakers are found they temporarily freeze a sibling. The movie focuses on a group of septuplet sisters who are forced to grow up hidden on all days of the week except one. Their grandfather cares for them and nams one of them a day of the week, on that day they can leave the house. Outside of their home, they must present themselves under one identity: Karen. They live everyday life this way until they reach their thirties, then suddenly Monday vanishes and the sisters for the first time in their lives all leave the house to find her. This action-packed movie will not disappoint.

In this Disney classic, Peter Pan (Robin Williams) grows up and leaves Neverland. He has a family and lives like a grownup who has lost the care free childlike wonder he once had. One night, Captain Hook (Dustin Hoffman) kidnaps his children and Peter Pan is forced to return to Neverland and find them. Through this process, he realizes how much he has changed for the worse and realizes that Neverland brings back his inner child, almost as if he had never grown up. This film has been a childhood favorite among many and will definitely touch your heart and leave you feeling nostalgic.

Critically-acclaimed film “Black Mirror: Bandersnatch” is truly one of the most unique films on Netflix. This interactive movie takes place in 1984 and follows a young programmer who creates a video game based on the twisted novel “Bandersnatch.” However, as he begins programming he starts to question his own reality. In this mind-blowing film, you choose what happens next. This movie keeps you engaged even in its dull moments and leaves you questioning whether the movie mirrors your own life.

“The Pursuit of Happyness” is an inspiring tale of a struggling father trying to provide a better life for his son. Chris Gardner (Will Smith) is a single dad who was recently evicted from his home. He and his son (Jaden Smith) live in shelters and struggle endlessly while Gardner works a non-paying internship at a prestigious Brokerage firm. Gardner must assimilate into the culture of the rich and work his way to the top to receive a paying position at the firm. Although they face many hardships, Gardner never lets that stop him. This film will not leave a dry eye in the room.

In the sold out Radio city music hall, stand-up comedian John Mulaney gets a laugh out of almost every audience member. Mulaney revisits his childhood in Chicago and recounts the relatable experiences he faced growing up. He touches on his time writing skits for NBC’s Saturday Night Live and the pains of growing up with his religious background, which now clashes with his wife’s religion. However, the show can seem boring at moments if you don’t connect or relate to the jokes. This stand-up show does a wonderful job at not being offensive and makes you laugh throughout its entirety.