‘The Haunting of Bly Manor’ is a must watch 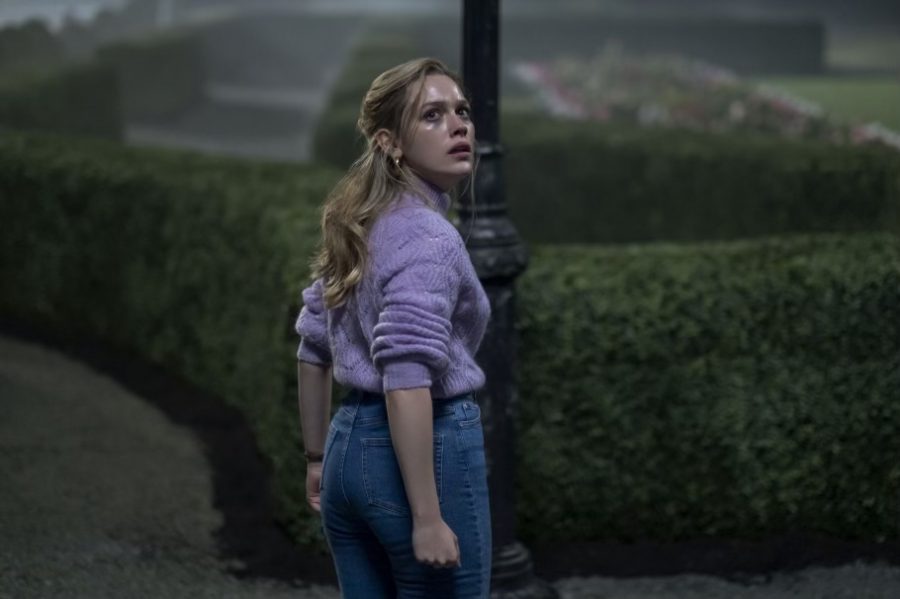 Fair use from Netflix. Frightened by what she saw, Dani (Victoria Pedretti) looks back at the Bly Manor. Recently released on Netflix Oct. 9, “The Haunting of Bly Manor” is a horror follow up series to “The Haunting of Hill House” and is inspired by the 1898 novel, “The Turn of the Screw,” written by Henry James.

Recently released on Netflix Oct. 9, the new show “The Haunting of Bly Manor” will leave you feeling both confused, and teary-eyed at the same time when you finish watching the nine episodes.

“The Haunting of Bly Manor” is a sequel series to the Netflix horror series “The Haunting of Hill House.” The series focuses on Dani (Victoria Pedretti), an American woman living in England, who takes on the job as a caregiver. She is taken to the Bly Manor where two orphaned kids, Flora (Amelie Bea Smith) and Miles Wingrave (Benjamin Evan Ainsworth), live. They have a cook named Owen Sharma (Rhaul Kohli), a gardener named Jamie (Amelia Eve) and Hannah Grose (T’Nia Miller) as a housekeeper. The house is haunted by past spirits who have died in the residence.

The show started off steady. But as the series continued, more things come to be revealed about the secrets of the house that left me shocked.

There are many hidden things in the show that people should pay attention to, as detail is important to understand the full story. Although this show is put into the horror genre, there isn’t much horror going on. It wasn’t as scary compared to the “The Haunting of Hill House.” However, this show has very interesting characters to watch out for. I wish they would have added some more horror, as it is described as a horror show. I was looking forward to having a few more scares, but the ending of the show was perfect and when you get to the end, get ready to cry tears.

As the show progresses, we get to meet the spirit that is haunting the house. A spirit by the name of Viola Lloyd, who has stayed there since 1680. She haunts the halls of the house and takes those who stand in her path. Overall, this show is very interesting as it contains many puzzling scenes that will leave you wondering if it was real, or imaginary. I enjoyed the mystery aspect very much, it makes you see things in different ways from when you first started watching the show.

I really liked the character development in the show, and how it focuses on giving each person a different storyline. The varying stories show that each person had different things they were suffering from.

An aspect of the show that I found very confusing was dream hopping, which is when spirits go back to their past moments momentarily and reenacts them. This was nice, but made me wonder which moments of the story were the present  and which were the past. I would get lost at times.

“The House of Bly Manor” is a fascinating show to binge watch and I would make sure to pay attention to details to make sure you don’t miss out on any important information.