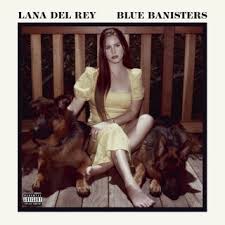 Fair use from Ploydor Records.

Before listening to her latest album, all I knew about Lana Del Rey was that she is the artist of the hit single “Summertime Sadness.” Her new album blew me away and showed me that there is much more to her than that one song. “Blue Banisters,” Lana del Rey’s eighth studio album, was released Oct. 22.

The color blue occurs many times throughout the album, such as in the songs “Blue Banisters,” “Beautiful,” “Nectar of the Gods,” and “Sweet Carolina.” The color blue represents the artist’s melancholy. She has been through many difficulties, and blue is a somber color that represents how these difficulties affected her. “Beautiful” is my favorite song on the album. It illustrates that sorrow is not necessarily a bad thing because it can be used to create beauty. I could really perceive the pain in the artist’s voice by the way she sang. Although there are a few times in this album I wanted to tell her to lighten up, “Beautiful” reminded me that sadness is natural and fruitful. The song references Pablo Picasso’s blue period. If Picasso had been happy, he never would have created such stunning artwork.

I noticed that feminism is another theme in the album. “Violets for Roses” demonstrates that men often want to have control over women, but women shouldn’t have to change themselves to please men. Furthermore, “Sweet Carolina” shows that men often leave women when they get pregnant, which feels isolating. In the song “Blue Banisters,” friends help the artist recover from a break-up. Friendship between women gives us strength in the face of sexism.

I found the album to be very relatable. In particular, the song “Black Bathing Suit” reflects the loneliness I feel during COVID-19. I haven’t heard many artists explore the topic of COVID-19, so it was refreshing to hear a song that relates to my current situation. I also think ubiquitous images of flowers and nature made the album feel more universally relatable.

The album kept surprising me, as I was pleasantly surprised by the instrumental interlude. The lack of vocals allows me to focus on the array of musical instruments.

The only thing I didn’t like about this album was that some of the songs were not beautifully complex; they were confusing. I had to listen to some songs multiple times or look up the lyrics to understand their meanings. “Living Legend” was especially perplexing. I didn’t understand the niche references and many of the lyrics seemed meaningless.

I hope Lana Del Rey will continue to explore her many emotions through music. I enjoyed listening to this album.