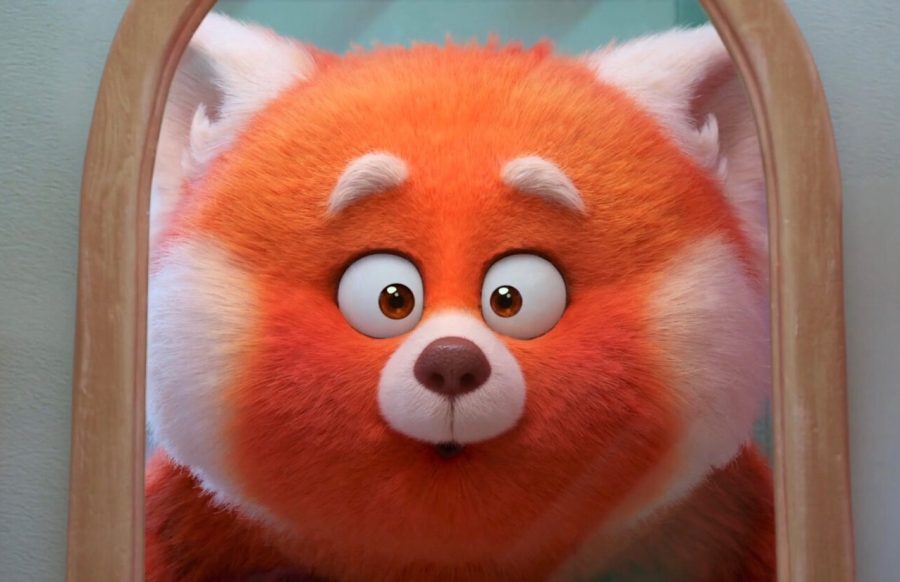 “Turning Red” follows sheltered 13-year-old Mei, who has to juggle her friendships, school life and family business, all while her overprotective mother rules her life. Mei’s whole world crumbles when she starts turning into a red panda at the worst possible times. Meanwhile, her friends try to get tickets for their favorite boy band, ‘4*Town,’ who her mother despises. She lies to her mom about becoming a panda and who her true self really is – creating a slippery slope she is imminently bound to fall from – hiding behind a ruse.

“Turning Red”’s artstyle is a big step up from previous Pixar films,  looking much like cartoon characters living in a real, live, world with realistic detailing and effects. The color grade for the world evokes an earlier time when the sky felt bluer and the grass felt greener, fitting for a movie set in the 2000s. Many 2000s-era paraphernalia are not only easter eggs within many shots, but also advance and affect the plot in unexpected ways.

The overarching story of “Turning Red” is relatable and funny, maintaining an awkward comedic style throughout. Mei’s panda circumstances are compared to bodily insecurities and her mom mistakes her becoming a panda with starting puberty.  The puberty-adjacent elements in the plot are very tame and take up at most 2 minutes of the runtime. Verbally referencing things such as tampons and gyrating in passing is the full extent of “Turning Red”’s potentially triggering moments for kids. It is geared towards kids, and is child friendly.

Despite its tiny presence in the movie, the existence of any puberty-related issues grows my admiration towards Pixar for pushing the envelope further for animated movies in general and having the nerve to show and talk about taboo topics in a family-friendly movie. This kind of development in the mostly static industry that is children’s entertainment could help to create more impactful and mature stories for younger audiences for the future.

The hilarious satirization of boy bands like *NSYNC in “Turning Red”’s fictitious band ‘4*Town’ is palpable, with distantly similar music written by none other than Billie Eilish, the popular musical phenomenon. The hip-hop-esque music these ‘Townies’ sing is surprisingly catchy and all the more funny because of it. But despite some great music written by Billie Eilish, “Turning Red” has no really memorable score. The remaining non-diegetic music is bland and generally just left for the background. Composed by Ludwig Göransson, known for his music in “Tenet,” “Black Panther,” “The Mandalorian” and more, I expected something more unique and memorable from such a talented musician. Unfortunately, however, there’s only one moment I can think of where the music was heartfelt enough to give me a slight tear-up, a downstep from most Pixar-produced movies that I find elicit stronger emotions. Ludwig Göransson somehow doesn’t match the suspenseful score for action sequences that he masterfully composed for “Tenet” (a highlight of that film), majorly letting me down considering the surprising prevalence of action in this movie.

“Turning Red,” in the same fashion as Marvel’s “Shang-Chi” from last year, eventually devolves into a grandiose battle at the end, leaving the original concepts behind in what seems like producers untrusting of the story being told and intervening in the third act. Luckily for “Turning Red,” its action sequences feel more natural within the story than Shang-Chi, but are unwelcome in such a grounded story nonetheless. Disney’s child-friendliness takes over during the action – creating absolutely no stakes for the hero – and making the once interesting story somewhat fall flat by the end of the third act, following the same tropes it sidestepped tactfully initially. It eventually pulled me back into its Pixar-branded charm by the end, but would have left a better taste in my mouth had it stayed more grounded in the story it had set up earlier on.

A must-watch for many Pixar fans, “Turning Red” is hilariously original and topped off with top-notch CGI animation, yet I see it as turning many away with its superfluous action elements deviating from the interesting story it was initially telling. Ultimately, despite this movie’s apparent flaws, it continues to make me eager to see Pixar’s original concepts they conceive further down the line.