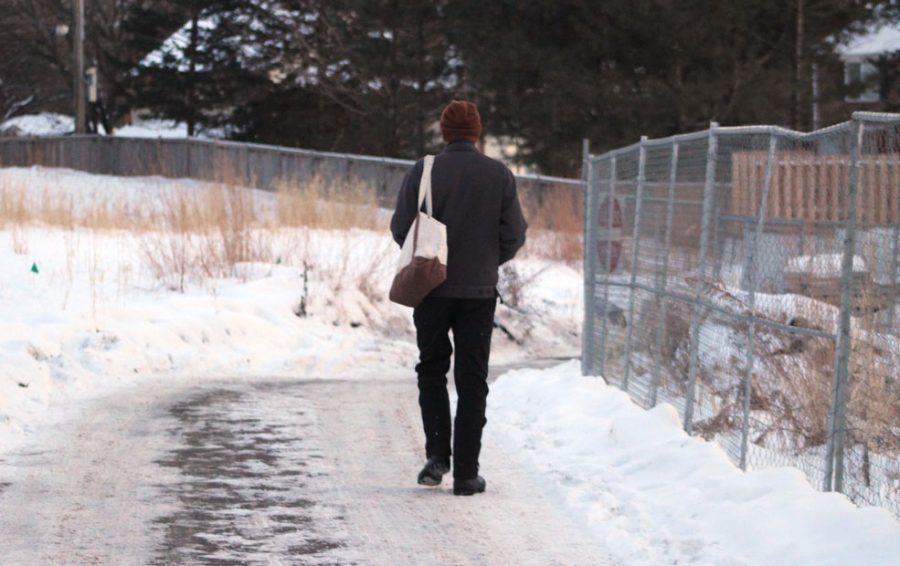 A nature center employee walks along the nature center paths Dec. 17. Westwood Nature Center is hosting a Be The Light Winter Solstice Walk on Dec. 21. The event is to inspire people with mental illnesses to step into the light and out of the darkness.

St. Louis Park offers their third annual Be The Light Winter Solstice Walk Dec. 21 to encourage community members to be aware that some people in the community are experiencing mental illness.

Becky McConnell, an employee at the Westwood Hills Nature Center, has assisted the planning of the program. McConell said the program’s intentions were to bring more attention and understanding to the issue.

“We hope (the event) brings awareness to the issue and it fosters kindness, compassion and understanding,” McConell said. “A lot of people share their stories and you can see how important it is to them and how they appreciate that someone is talking about it.”

Sophomore Marley Miller said she thinks this event has the potential to benefit the community.

“This will help our community by sending a positive message surrounding mental illness and overall create a better environment for everybody,” Miller said.

The Westwood Hills Nature Center has run the annual Winter Solstice Walk for years, although only recently added the mental health aspect, which was part of a wellness initiative issued by the community, according to McConell.

“We were approached by a member of the community who had received a grant, and it was actually a city wellness initiative, Health in the Park Champions. (Andrea Nyhusmoen) had been awarded this grant to bring in that light piece to the event. So it was an annual luminary walk and now it has that added piece of awareness,” McConell said.

McConell said participants can make a small paper lantern called a “luminary” to express themselves through  art which will light the pathway.

“There are different activities at the event. One of the activities is you get to make a luminary and you can decorate it however you want,” McConell said. ¨Some people (use) greater messages to the community as bei

ng the light, some (write a message) to someone struggling, others will do it in honor of someone who died by suicide.”

Miller said she thinks this program will be a good opportunity for members of the community because of its uniqueness.

“It’s a really nice and cool opportunity because it’s different. It will probably have a really positive message and outcome. I’m excited to see how it goes,” Miller said.

McConell said the event was recognized for its distinct program and given an award of excellence.

“The fun thing about this event is that we nominated it for an award and it won through the Minnesota Park Recreation and Park Association, and it was in the category for the event itself and just recognizing how unique it was,” McConell said.

Participants can ride a shuttle bus from the St. Louis Park Middle School to the event. The event will take place 6:30 p.m.- 8:00 p.m. Dec. 21 at the Westwood Hills Nature Center.