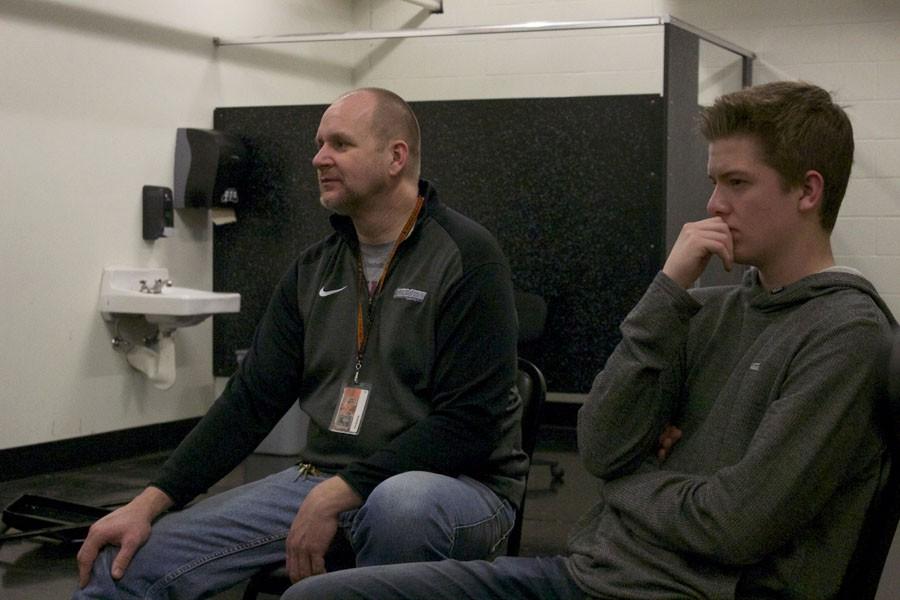 Sophomore Collin Perkins and adviser Tim Sension listen to other FCA members as they talk about God.

“I really enjoyed the meeting,” Albrecht said. “It was listening to other perspectives and how they put God into their sports.”

Albrecht said she learned from Venada that there are similarities between coaches and God.

“Jake told us a story about when he drove a Porsche, the instructor next to him was telling him what he needed to do,” Albrecht said. “He compared that experience to how you and God are in a race together, and God is guiding you all the way through.”

Albrecht said this was the first time she attended a Fellowship of Christian Athletes (FCA) meeting and she plans on going to more in the future.

“The meetings are a good start to my day,” Albrecht said. “Everyone was so welcoming and I was able to open up with them.”

FCA adviser Tim Sension said the club had Venada as a guest speaker to talk about what God’s role is in his own life.

“He goes around to different FCA meetings talking to students,” Sension said. “I asked him to come and talk at our meeting and share stuff that is in his heart.

Sension said Venada discussed the power of Jesus and the effects of following him.

“Jesus is bigger and powerful than anything,” Sension said. “When we commit to following him, it can just be a life changing thing.”

Sension said he enjoyed being able to hear the different viewpoints of all the members.

“We got to have each person go around and share a little bit on what the meeting meant for them and what they got out of it,” Sension said.

The next FCA meeting takes place at 8 a.m. April 19 in the old gym.