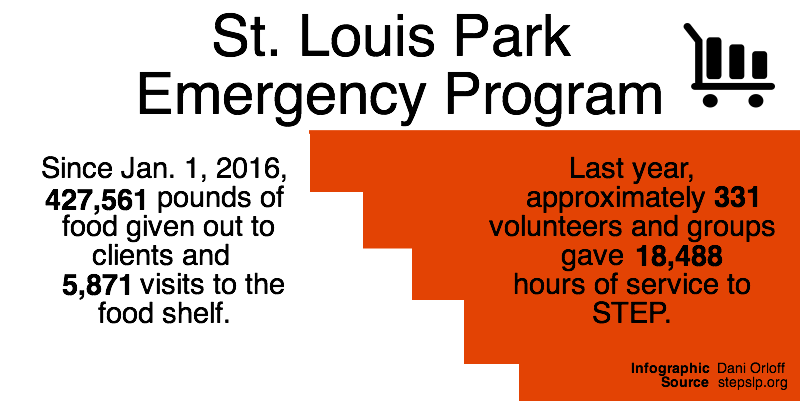 “I expected to work with sorting food and stuff,” Brinkman said. “(It was) just a quick group project but it’s still helpful and nice.”

Brinkman said the turnout for the group project, 15 students, allowed the members to accomplish a large quantity of work in a small time frame.

“I’d say it was a pretty good amount (of members),” Brinkman sa

id. “I think we could’ve done less because we were pretty efficient and there was a lot of people doing a certain job, but I thought we got a lot done with the people that we had.”

According to senior NHS vice president Ronen Pink, the students focused on the food shelf aspect of STEP.

“What we did was we went through donation bags. We checked to make sure that the food hasn’t expired and then we sorted them into categories,” Pink said. “Then, we put them onto shelves and then we put them out onto their version of a grocery store.”

Pink said the group project was effective and beneficial for the NHS members who attended.

“I think it went really well. Everyone seemed to have fun (and) we were very productive,” Pink said. “We went through four big bins, so I’d say that was a good day and we helped out the community.”

Brinkman said volunteering at STEP was a worthwhile experience and would take advantage of future NHS opportunities with the organization.

“I actually thought it was pretty fun,” Brinkman said. “It went by quick but we also did well with organizing ourselves. It just went by super quick.”

According to Pink, although NHS has struggled with exchanging information, it did not interfere with the success of the group project.

“I think one of the biggest issues with NHS right now is our communication, and I think for this particular project we did really well,” Pink said. “We were able to communicate, and I think they all had a good time and got something out of it.”

Pink said the NHS officers are in the process of planning upcoming group projects.

“All the time we’re trying to figure out new group projects. We’re trying to come up with new things to help out the community,” Pink said. “As things come up, we’ll work on getting NHS members out there.”

The next NHS group project will be volunteering at the Jewish Community Center’s annual benefit on Dec. 3.