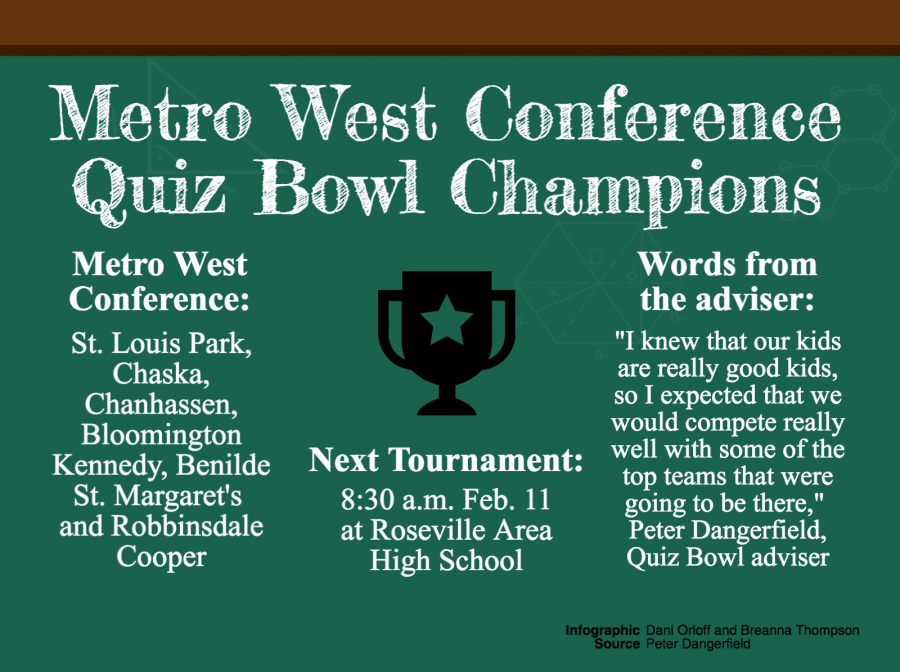 As sophomore Quiz Bowl member Daniel Hunegs reflects on winning the Quiz Bowl conference championship, he feels pride in the growth the team experienced this year.

“Metro West obviously is the conference that St. Louis Park is a part of, also including teams from Chaska, Chanhassen, Bloomington Kennedy, Benilde St. Margaret’s and Robbinsdale Cooper, (who) were all there,” Dangerfield said. “Our A team went undefeated, went 5-0, and brought home the Metro West Conference Quiz Bowl Academic Championship.”

Dangerfield said he felt the St. Louis Park team would compete well with the other schools in the Metro West Conference.

“I knew that our kids are really good kids, so I expected that we would compete really well with some of the top teams that were going to be there,” Dangerfield said. “I am not surprised that we finished first, but I am really pleased that we did.”

“(Winning conference required) random knowledge and just practice each week,” Hunegs said. “I wasn’t quite sure about the teams that were going to be there, so I was not quite sure what to expect.”

Dangerfield said the new members struggle with their unfamiliarity with the format of Quiz Bowl.

“Of the 14 kids that are on Quiz Bowl this year, 11 of them are sophomores and they are just unfamiliar with the format,” Dangerfield said. “It’s tough when you only have practice once a week and then once or twice a month we’ll have a competition, so it’s tough to get that regular repetition that some other types of teams might get.”

“We’ve gotten a lot more people now,” Hunegs said. “Instead of last year where we had two teams, we have three teams this year and we have more people at practice, which just makes everyone better, so we have improved with that.”

Dangerfield said the Quiz Bowl team continues to learn how to work together as one unit.

Hunegs said he appreciates the team aspect of Quiz Bowl, which allows him to meet new people.

“(My favorite part of Quiz Bowl is) definitely our team,” Hunegs said. “It is a lot of fun because we have three seniors and the rest are sophomores, so it is a good mix of people.”

Dangerfield said he enjoys advising Quiz Bowl because of

how passionate the students are.

“My favorite part is just getting together with 14 or 1

5 kids, whatever it may be on any given afternoon, and just all of us being there, all doing the same activity and all enjoying it and having a good time, so interacting with the students outside of the normal classroom,” Dangerfield said.

Hunegs said he advises those interested in joining Quiz Bowl to never give up.

“Don’t get discouraged if you don’t know one category, just excel at another one,” Hunegs said.
Quiz Bowl’s next tournament takes place at 8:30 a.m. Feb. 11 at Roseville Area High School to qualify for the NAQT High School National Championship Tournament.