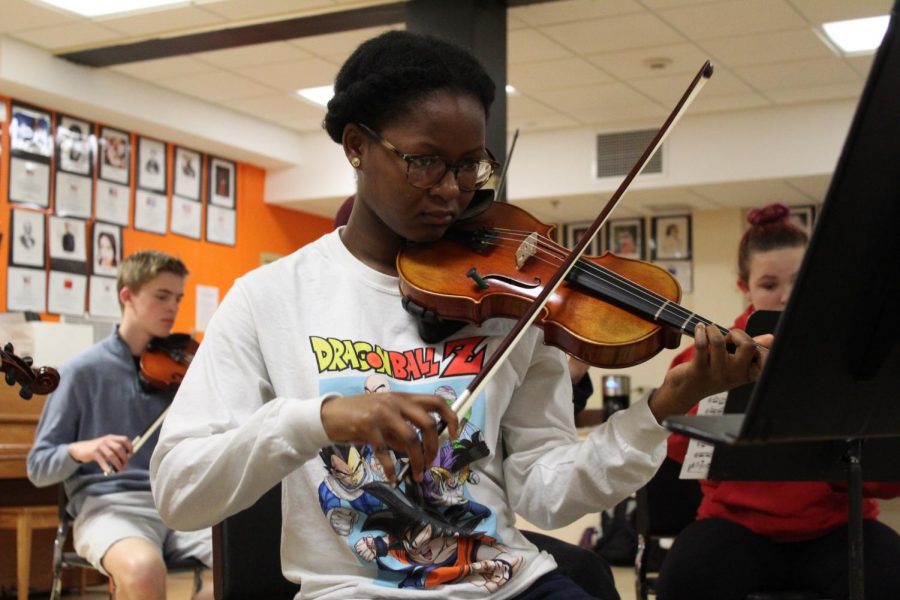 Junior Hilda Habia bows up her violin during class April 10. Practices are in preparation for orchestra's upcoming performance April 18.

Orchestra director Kou Lee reflects on the orchestra’s preparation for the district festival.

“I think it’s a culture. Music is part of being human; it’s part of our lives and just having the district festival helps create that culture, that part of our life. In a sense, it creates something that is part of the district, part of St. Louis Park,” Lee said. “Having music the one time we come together and show off who our students are in St. Louis Park has always been who we are.”

Sophomore violist Emily Turnquist said the festival provides an opportunity for students to show the development of their music.

“I definitely think (the festival) is important because to be able to see the progression of not only the music itself, but the community it fosters and seeing these musicians and people develop is really cool,” Turnquist said.

According to Lee, the district festival is a combined concert displaying the abilities of Park students from the high school and middle school.

“(The middle and high school orchestras) just get together and get the opportunity to play for one another,” Lee said. “I think that it really gives the middle schoolers an idea of what they will be getting when they come

to high school. It also showcases the abilities of the students in the Park district.”

According to junior Hilda Habia, the orchestra students prepare for the festival in class as well as at home.

“As a whole we’re practicing the music. We have sectionals, and we practice on our own at home. I (brought) my violin and my music home over spring break to practice some of the songs that we’re going to be playing,” Habia said.

Although this is Lee’s first district festival, he said he feels confident in his students and wants to get to know the middle schoolers.

Sophomore Zoe Frank said she is looking forward to seeing students from other grades at the festival.

“I’m excited to see the different grade levels and what songs they’re doing and hear the improvement from grade to grade and to see some of the younger kids I haven’t seen in a while,” Frank said.

According to Habia, the festival can pose some challenges due to its unique format.