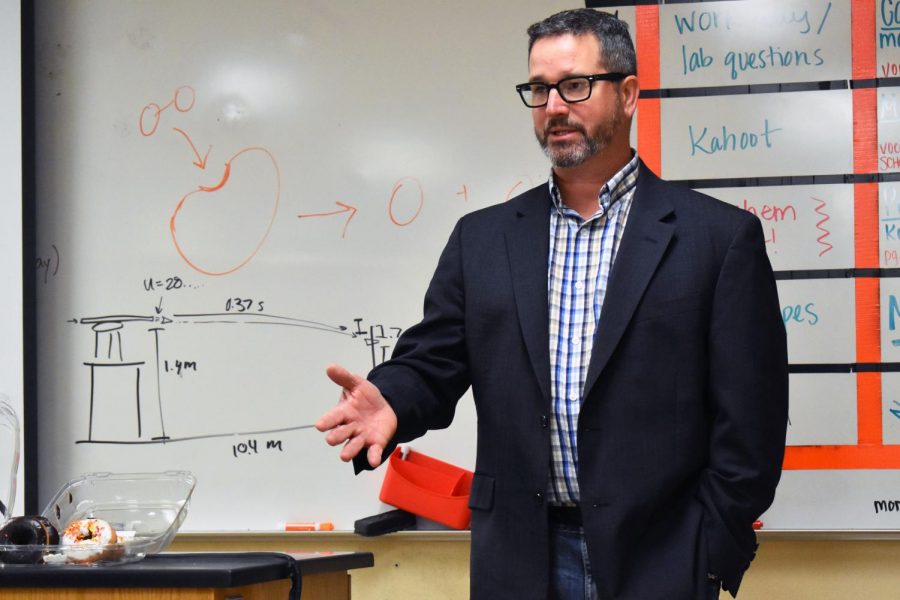 Corporate sales rep. for an orthopedic implant company Daniel Klaers said he agreed to speak at Medical Education Development club because it allowed him to educate students on his profession.

“What I do isn’t widely known or publicized and a chance to talk about it and teach people sounded like a good thing to do,” Klaers said.

According to senior and Medical Education Development (MED) club leader Sofia Seewald, she invited Klaers to speak with the intention of widening the perspective of the medical field.

“Daniel Klaers works at Wright (Medical) Technology and sells medical devices, so I thought he would be a really cool speaker because it’s a different take on the field of medicine,” Seewald said. “It can open up people’s eyes to new opportunities and careers in the medical field.”

Seewald said Klaers’ job is unique in that he doesn’t operate on patients, but rather assists doctors in using the medical instruments he sells.

“(Klaers’) job is really cool in the sense that he is not actually operating on a person (and) doesn’t perform the actual surgeries, but facilitates and helps surgeons figure out how to use the medical devices he sells,” Seewald said. “He needs to know more than the surgeon about the technology to make sure if anything goes wrong he (can tell) them how to fix it.”

According to Klaers, he is glad he was able to inform MED club on his profession because some people are unaware of the many jobs within the medical industry.

“I don’t know if it will influence anyone to look into the industry, but it’s one of those things where there are so many things out there that nobody’s aware of. It’s just good to pass along information,” Klaers said.

Senior Sydney Ring said she enjoyed learning about a different area of the medical field that isn’t well known.

“I liked to hear about the different side of medicine that’s not just the doctors,” Ring said. “There’s more people than just the surgeon (in the room).”

Klaers said if aiming for a career in the field of medicine, it’s best to volunteer in various medical spaces, because it’s important to start learning early on.

“Get started early, volunteer, hook up with a clinic or a hospital or a doctor’s office and learn what they do,” Klaers said. “You should start with just volunteering so that you can learn.”

According to Ring, listening to someone speak about a profession you’re interested in is helpful in leading you on the right path.