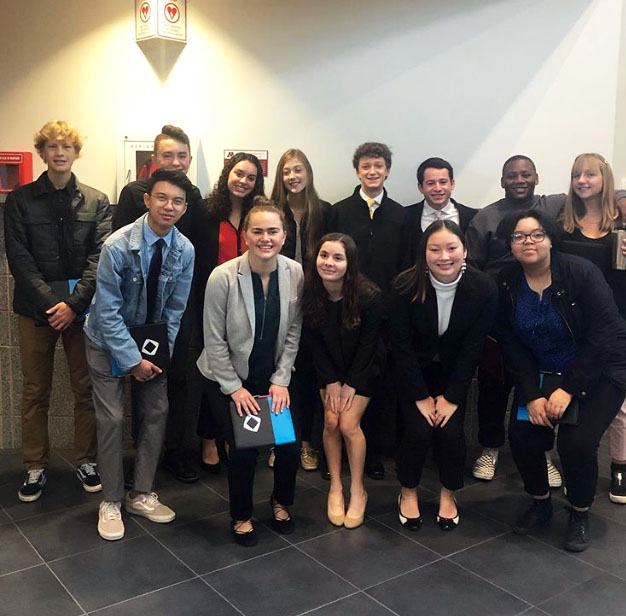 Used with Permission by Sophia Ross.

“I think this helped the people who were new to DECA, and it was a refresher to the returning members of what the competition was like,” Boxley-Harmon said.

According to Boxley-Harmon, DECA members went over several mock event categories in preparation for when DECA has a real competition.

Co-advisor of DECA Abigail Lugo said the mock competition at the University of Minnesota helped members prepare for the actual competition.

“It’s really nice to get the students on-site at a college campus and it’s a really great experience because since it’s just an out of school activity, we don’t have a lot of time to prep with the kids,” Lugo said. “So they usually go into the competition not knowing what to expect. This was a good way for them to preview it.”

Junior Alenea Green said the experience overall was unique as this was her first time being a part of DECA and attending a mock competition.

“(The field trip) was pretty cool, it was something different for me. I’ve never done a mock competition (before). We had to do an interview and make up scenario, it was kinda stressful but it was cool,” Green said.

Green said she learned several tips during the mock competition she could use when going into an official competition .

“I feel like I’ve gained more experience on how to interview people and what to do in those situations,” Green said

Boxley-Harmon said the field trip has prepared him for future competitions.

“I feel like I’ve learned how to perform in the competitions to the best of my ability,” Boxley-Harmon said.

Lugo said she hopes DECA attends the mock competition next year as it helps students practice in a non-stressful environment .

“I would like (DECA students) to attend it next year,” Lugo said. “It’s a really great way for the students to experience this without the pressure of competition and advancing to a state level.”