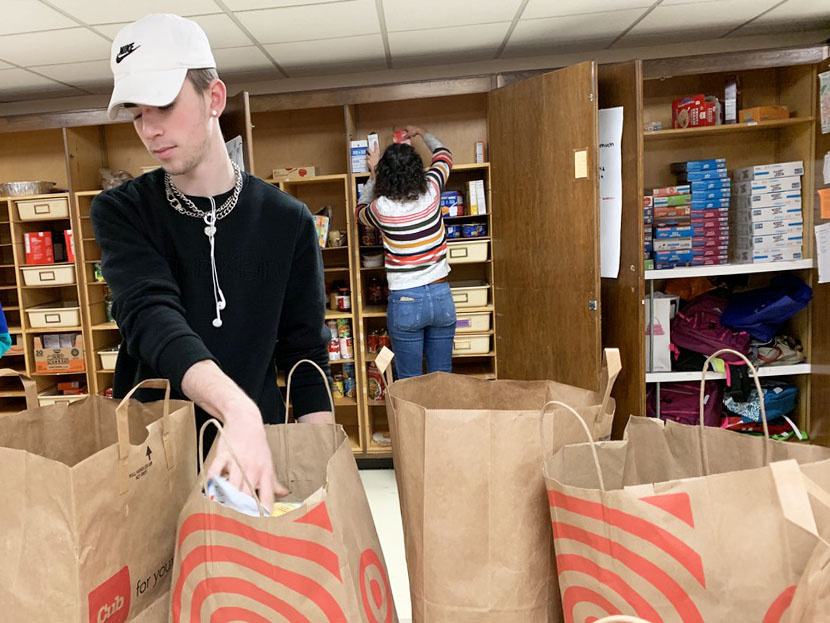 Senior Hayden Haase packs food for donations Dec. 11. The National Honors Society joins the Birdfeeder and Clothing Closet to help the community. As an incentive, all three groups are giving a donut party to the third hour that donates the most items.

Feeling optimistic about the food and clothing drive provided by National Honor Society (NHS) members for Birdfeeder Dec. 9-13, co-manager and junior Ayan Hassan said it will impact Park in a positive way.

“It’s really helpful that (the) NHS wants to help us because it’s a way for students to get involved. By having a food drive it gets the word out more and also helps us get the things that we need,” Hassan said.

According to Birdfeeder adviser Sophia Ross, students and staff support the donation drive by giving certain food and clothing items.

“We are asking teachers to encourage their students to bring in non-expired, non-perishable food to donate to the Birdfeeder as well as gently used or new (clothing) items for students at this school,” Ross said. 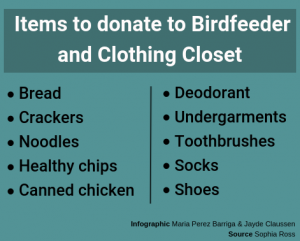 Clothing Closet manager and junior Hope Kihanya said having this drive will assist many students in need of materials.

“(The drive) will benefit students because they will have access to more resources. They won’t have to worry about not being able to get what they need,” Kihanya said.

Ross said NHS president Yoni Potter planned the drive along with other members of NHS for donations towards Birdfeeder and Clothing Closet.

“Yoni Potter had approached us wondering what we needed and we told him. He organized and got together with some NHS members and Mr. Otto, who is the NHS adviser, to put this together,” Ross said.

According to Ross, many students at Park are in need of certain items, so the drive has the potential to greatly benefit others if people donate.

“We need gently used clothing because we have people popping in all the time when we don’t have things for them. I think it would be really cool if students here could help out their peers,” Ross said.

Ross said once the donation drive is finished, Birdfeeder will award a donut party to the third hour class that donated the most items.

“What (Birdfeeder is) going to do is, once the week is over (students and staff) have until (Dec. 13) to actually bring their donations down and keep tally of (which class)  brought in what, then the winning class gets a donut party for donating,” Ross said.