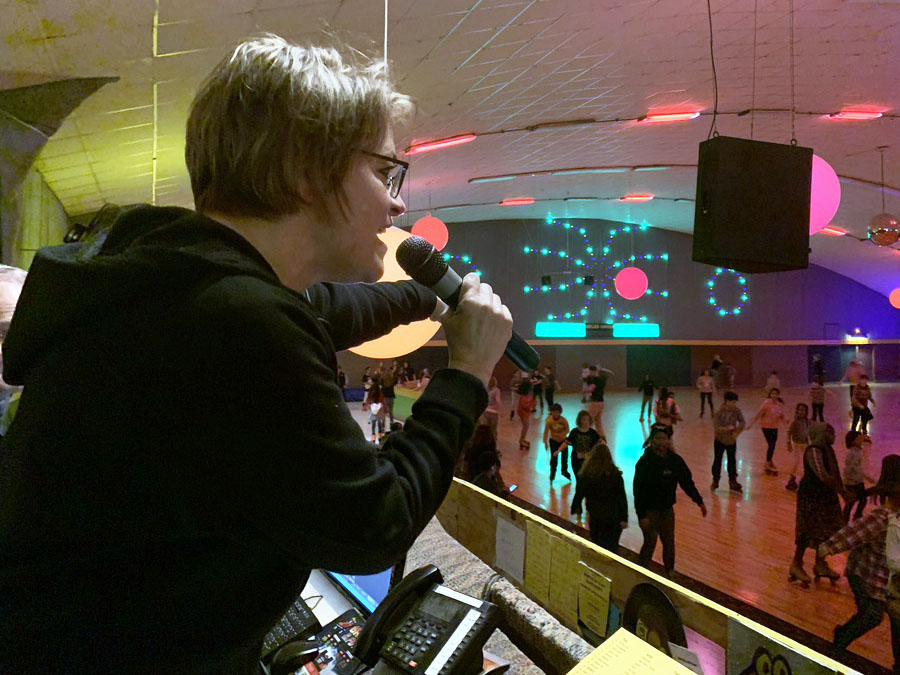 Adviser Shari Fox directs roller skaters to guess the language of the song she plays Jan. 30. Fox has planned international skate night for the last 13 years in an effort to allow middle schoolers to learn about the language and teachers they will have the following year.

“The event was about introducing fifth-grade kids to the idea that there are different languages out there that they can learn,” Fox said.

According to Fox, she made the event to provide an entertaining way of teaching the middle schoolers about international music.

Junior Yehoshua Leib Leahy said he had a fun time at the event as he was unable to eat German apple pancakes at the last German club meeting.

“I like doing this because last time we made apple pancakes, but I couldn’t eat any because I’m kosher so I like that I can participate in this,” Leib Leahy said.

“I no longer work at the middle school, but I still enjoy hosting the event,” Fox said. “”

According to Fox, the next meeting for German Club will take place Feb. 17 and they will be making a German berry dessert.

“In German Club, we decided the 17th of February, and I’m sure we’re probably going to make dessert,” Fox said.

Leib Leahy said he enjoys being a part of German Club as he can learn about the culture and interact with other kids who take German.

“I really like German class, it’s my favorite class and so that’s why I thought German club would be fun,” Leib Leahy said.

Fox said the German berry desserts being made in the upcoming meeting will be enjoyable for many students, and it’s inexpensive.

“It doesn’t cost that much and the kids always like it. There’s no one that doesn’t like it,” Fox said.

The next German Club meeting will take place after school Feb. 17 in room B241.