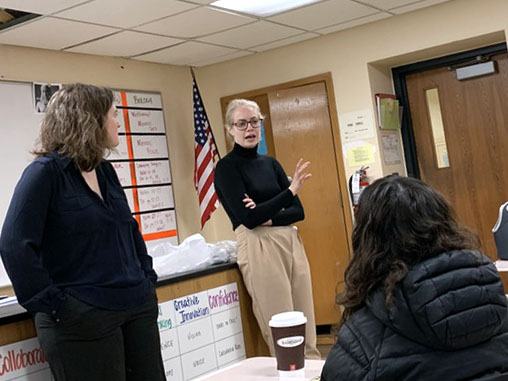 According to Frisch, part of her job is taking care of women who are pregnant, as well as assisting women while giving birth.

“I take care of women, either with women trying to get pregnant, and I also deliver babies and do C-sections,” Frisch said. “The ‘GYN’ part is taking care of women that aren’t pregnant but need checkups or have any female related problems with their periods.”

According to senior and Med Club leader Sofia Seewald, her goal for the Med Club is to get more students to attend the meetings.

“I’m trying to get more people to show up to the meetings through social media, and also talking to people around the school,” Seewald said.

According to Cruse, medical school is taught in different places.

“The first two years of medical school are classroom learning didactics and years three and four are clinical rotations,” Cruse said. “Now I’m on my OBGYN rotation with Dr. Fresh.”

Frisch said she got career inspiration from her father, who is also an OBGYN.

“I always wanted to be one, ever since I was young,” Frisch said. “My dad was an OBGYN and being around him and watching him made me want to be one.”

Cruse said her journey to joining the medical field evolved from loving science, but it took time to actually become a medical student.

“In college I did start out in pre-med but I also considered careers like journalism, public health and social work,” Cruse said. “I realized  this wasn’t the work that I needed to do in order to heal patients and so that’s why I chose being a medical student.”

Both Frisch and Cruse’s goal at the end of the discussion was to let students know there is a lot of sacrifice and schooling that goes into medical school, but if someone is passionate about it, it’s the right choice.

“It takes a lot of schooling and you don’t want to get into it if you are not committing your time, but (it is) worth it if you love it.” Fresh said.

Seewald said the purpose of MED Club was to show people the different career options in the medical field.

“The purpose of MED Club is to show people the different careers they could do as medical professionals,” Seewald said. “It’s super interesting to expand your view of medicine by hearing these speakers come in, and people are starting to get inspired.” 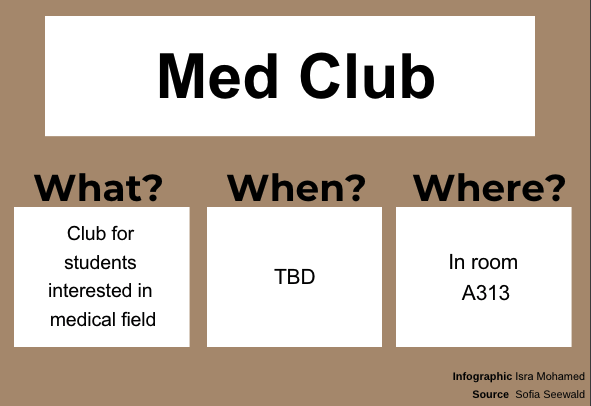