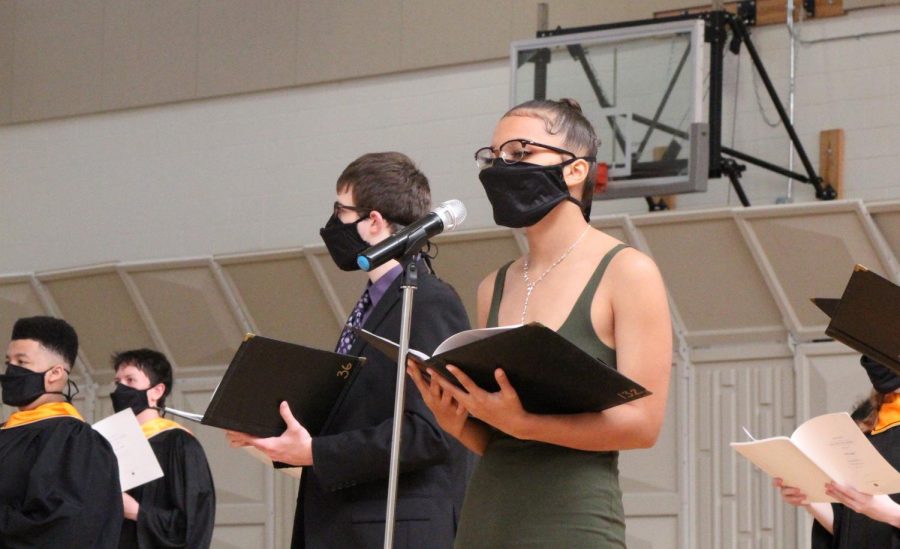 A unique performance space, including specialty masks and COVID-19 restrictions, were just some of the barriers faced by Park’s choir this weekend. Park hosted its first in-person concert in 15 months May 21 at the activity center.

According to choir teacher John Myszkowski, the nerves were much higher for this concert given the situation.

“There was a huge sense of relief afterwards,” Myszkowski said. “I was sweating bullets with it, because we’re basically in a barn, there’s so much noise from the fans, but in the end, they overcame it.”

Senior Kim Parkinson said one of the greatest adjustments students faced was wearing singers masks, social distancing and singing without the feedback from peers next to them.

“We had to space out, which made it difficult to hear each other and produce a good sound like we are used to,” Parkinson said. “We also had to put more time and effort into the chairs and social distancing and even getting new masks to be able to sing.”

The composition included 12 songs, all sung in foreign languages, adding an extra layer of difficulty. For sophomore Antonia Antony, extra dedication was crucial.

“We had to learn the languages and many of the songs were in a high key,” Antony said. “It was hard, but we used time outside of school and just kept practicing.”

With cohort C students being fully online this school year, seeing everyone face-to-face was exceptionally special for Myszkowski.

“It was amazing to see kids I hadn’t seen forever. Just to physically see them is like having your own kids come home,” Myszkowski said.

According to Parkinson, lack of time was an issue, but making the most out of rehearsals was key to a successful performance.

“We were crunched for time and rehearsals were even more intense than how they usually are, because we had to practice so much more,” Parkinson said. “But it feels incredible to be back performing again.”

Even with the challenges, Antony is proud of how the choir was able to adapt under unprecedented circumstances.

“I think we did great,” Antony said. “We had a lot of mixed emotions, but people really showed up and overall it sounded really good.”

Parks next concert will be held at 6 p.m. June 2 in the activity center, followed by a senior recital at 7 p.m.