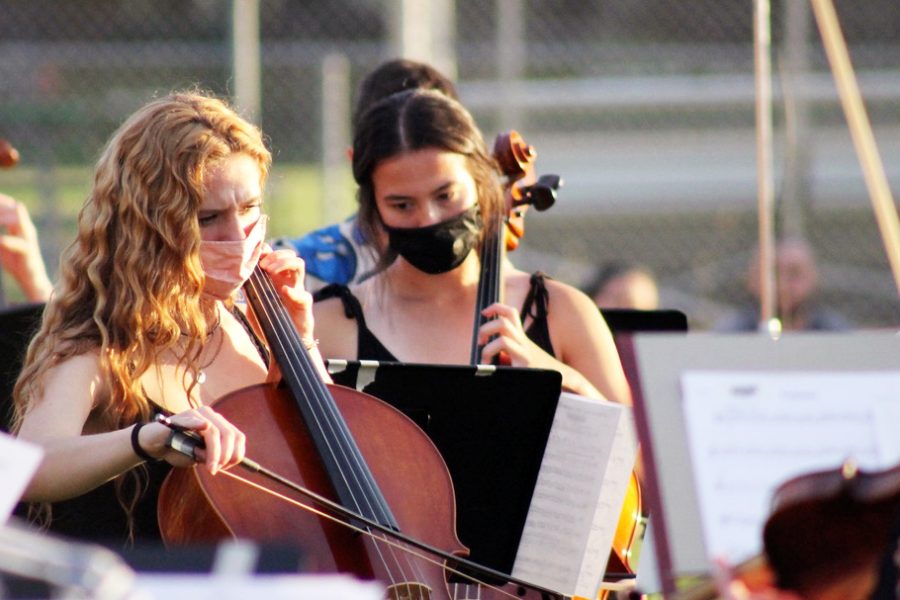 Seniors Alanna Franklin and Abby Meyer play the cello at the spring orchestra concert June 3. The concert took place outside of the school.

Even after senior Sophie Yakes had finished her last orchestra concert, she said she struggled to recognize the finality of it.

“There are so many good memories that I have in orchestra,” Yakes said. “It hasn’t hit me yet that I’m gonna be making new memories in a different place without these people, that’s kind of hard to grasp.”

Orchestra played their last concert outdoors on the field adjacent to the tennis courts June 3. The concert featured all orchestra students as well as a handful of returning alumni. Orchestra director Kou Lee said the ability to have even just one concert in-person after the COVID-19 pandemic is something that is not lost on him.

“It’s just special to be able to play one concert after you know what’s been going on the last like 420-something days,” Lee said.

Due to the unusual circumstances surrounding the concert and the school year as a whole, sophomore Meshach Mandel said he still feels a lack of competition to the work he has put in this year.

“It doesn’t feel like a full finish, because we barely started but it’s cool, in a way, to wrap up a year with one concert,” Mandel said.

According to Lee, the concert was bittersweet, as it marked the first time the orchestra could play together again, and also signified the end of a hard period for many people.

“I’m sad for what they had to go through, but then they persevered and they endured and so for them to have this moment to play — that was special,” Lee said.

While he is looking forward to returning to orchestra next year, Mandel said he will miss this years seniors and what they brought to orchestra.

“[The seniors] were really the experts here,” Mandel said. “They helped the freshmen, they knew everything, they really brought the group together, so it’s going to be hard to fill in their place.”

Although she plans to play in other orchestras in the future, Yakes said leaving Park’s orchestra will leave a a hole in her heart.

Lee said the individuality of this year’s graduating class will make them sorely missed by himself and others.

“Every one of them has something that I’m going to miss about them,” Lee said. “I have a lot of things to miss.”