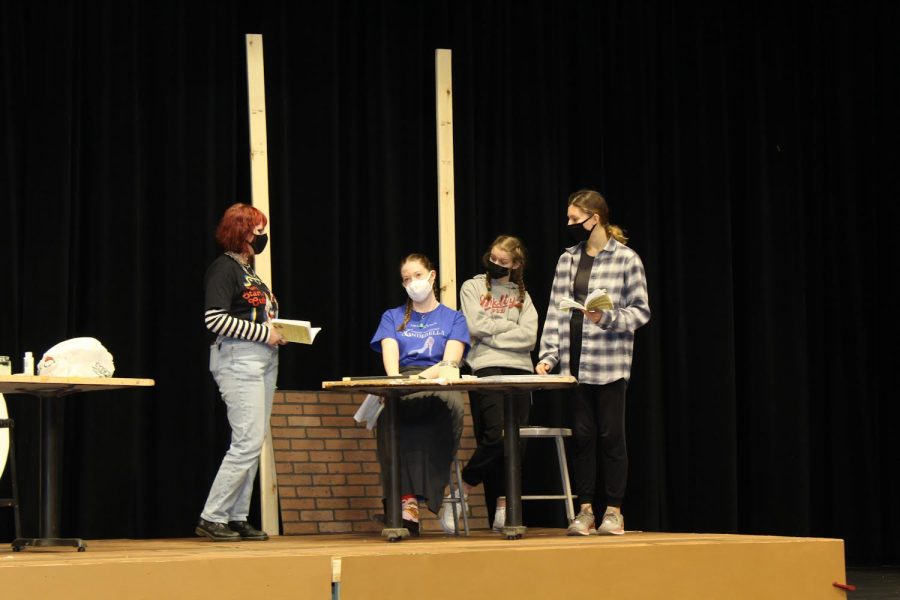 Seniors Caroline Butler and Louise Marshall, and juniors Gwen Rocker-Gladen and Abby Baudhin rehearse for the Winter One Act “These Shining Lives” where they play workers plagued with radium poisoning. The show is opening Jan. 14 and closing Jan. 16.

After its production of “Anne of Green Gables,” the theater program received a shocking announcement.

“I was always very discouraged to go for larger roles, mostly because I didn’t really see myself in those,” Mora Zengel said. “Not only being chosen to perform as a lead, but also to get this award was huge for me. It really made me think highly of myself.”

Spotlight supports high school theater programs within Minnesota, by sending experts to watch productions and give out feedback or awards. According to theater director Jodi Schifsky, it received individual and overall outstanding honors and honorable mentions — performers who are selected get to perform at a big showcase at the end of the year on the Orpheum stage.

“They looked at all the different things that we were doing well, which is a great compliment, as far as the specific shout outs and honorable mentions,” Schifsky said. “It’s a great way to celebrate but also learn from other schools.”

According to sophomore Elena Colacci, receiving an honorable mention during her first live show has been a good indication of her constant progress in theater.

“I tried to really put a lot of effort into my roles and really think about my character and how I can portray different parts of them — I’m really glad that seemed to come through to the audience. Because that’s my goal: to make the character choices that I’m making actually be visible,” Colacci said. “As my first live show since the pandemic, it’s just really cool that we as a cast got the recognition and as a crew.”

The feedback received by the program has been integrated into the students’ learning going forward, Schifsky said.

“We had a meeting earlier this week where we sat down and read the group feedback together … then we know our strengths to continue with and the things that we should start focusing on for other productions,” Schifsky said. “Whether they’re musical or not, I think we can learn and grow from each outsider’s perspective.”

While receiving the award has given her valuable advice, Mora Zengel said it also encouraged her to continue pursuing her passion for theater.

“I did get feedback on this. It was very particular stuff, just to improve. One of the things was actually for me to slow down, so I’m going to definitely work on that,” Mora Zengel said. “As far as this award goes, it’s inspired me to continue with theater, not only this year, but hopefully in the future in college.”

Although the production ended, Schifsky said the experience and award has been very valuable due to its impact on students.

“I’m incredibly proud of the performers and the technicians — it’s a good reminder of how all those pieces work together to tell the story. It’s really great that all of the facets of our performance and production were acknowledged,” Schifsky said. “It’s always an inspirational boost to be recognized for what we do. We can still keep learning from what we did.”