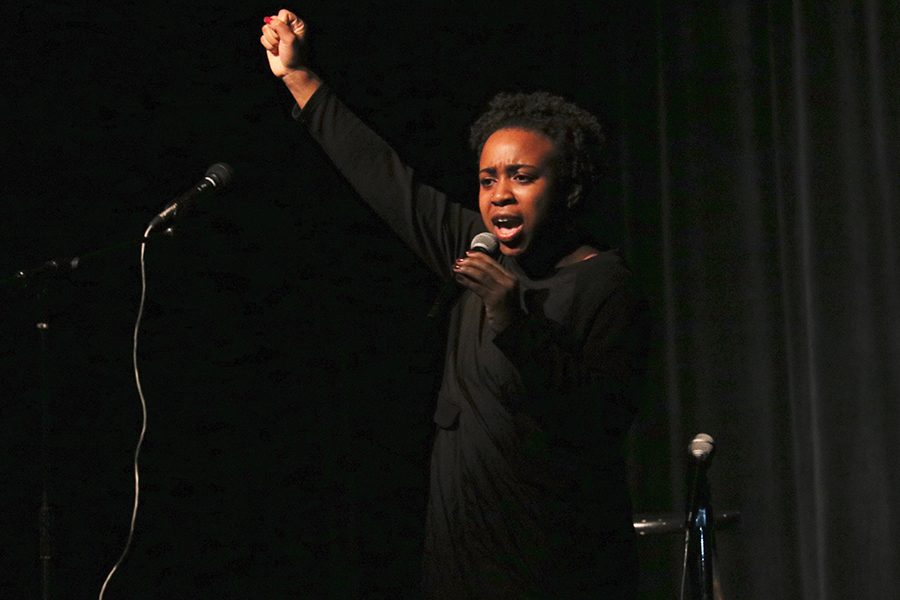 Senior Eben Managbe recites a poem by Maya Angelou at the Black History Month show. Managbe raised her fist at the end of the performance as an act of solidarity.

The lights in the Auditorium turn off and the curtain draws open to students with their fists raised in the air chanting “we will not be hidden,” emphasizing the show’s theme: Hidden History.

Senior Suweyda Abdi, one of the student leaders of the show, said it was hard to pull the performance together without a teacher supervisor and access to the Auditorium.

“At first it was extremely hard because there was no teacher willing to step up and supervise it so for almost two weeks we were looking around asking for teachers,” Abdi said. “(The day of) was our first time performing in the Auditorium, it was closed off for us so we’d have to work in C350 and the gym. It was our first time actually leading it and there (were) a lot of kinks we had to sort out literally the day of, a couple of hours before the performance.”

Abdi said she wanted viewers to get an idea about all the black history they are not taught in a textbook.

“I want them to take away that there is so much history that we are not taught about and there are so many important black people that we just don’t know of because it’s not really incorporated in our education,” Abdi said. “Get out there and start researching. School is not the only place you can learn, there is so much more that we have to learn about.”

Principal Scott Meyers said it was hard to help Abdi and senior Sulekha Farah find a teacher to supervise them, they had to organize the show with minimal help.

“I didn’t have a whole lot of solutions per say unless it came to using the stage and stuff like that but actually they did a lot of that coordinating,” Meyers said.

According to Abdi, the show was student led because of the lack of teachers who volunteered to supervise, but also to be an influence to students.

“This is our last year as seniors and we wanted students to say, even if there are no teachers that do it next year that you have to step up and do it yourself. There is no one that will do it for you,” Abdi said.