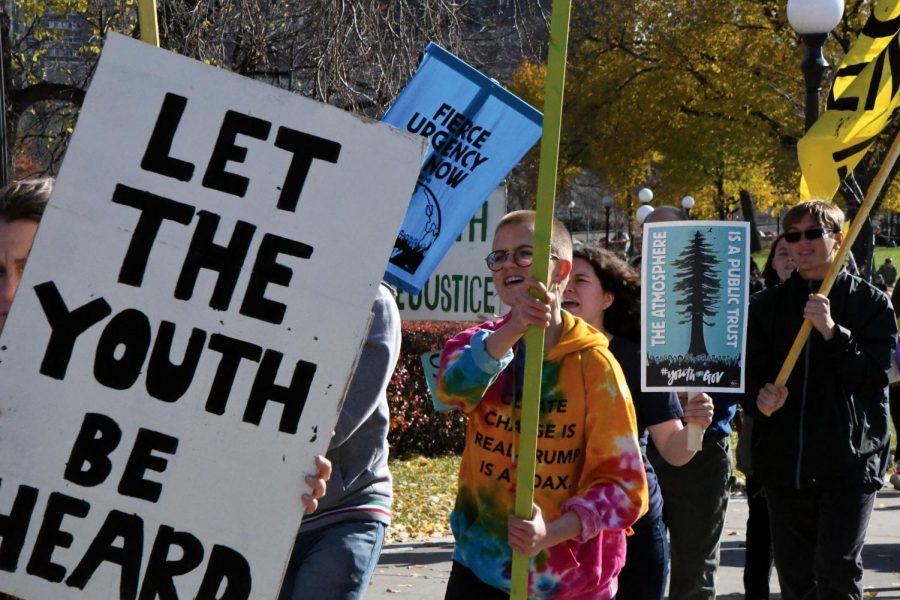 Loud and proud: Junior Maddie Lind marches alongside juniors Zoe Younger and Isaac Wahl while holding a sign that reads "We Rise." Lind marched Oct. 28 at the Minnesota State Captiol to advocate for a Fossil Free Future. All three are members of Roots and Shoots.

Senior Katie Christiansen said it is up to the new generation to advocate for their futures in relation to global climate change. That’s why she helped organize the Our Future, Our Right: March with MN Youth for Fossil Free Future.

“I think this is important because we are going to suffer the worst consequences of climate change as youth,” Christiansen said. “Older politicians are not really considering our futures when they are making their decisions now because it’s something that isn’t going to affect them as much.”

According to Climate Generation youth and policy manager Sarah Goodspeed, youth from all over the Twin Cities gathered at the Minnesota Federal Courthouse Oct. 28 to march to the Minnesota Capitol in support of the #YouthvGov hearing fighting for a federal Climate Recovery Plan Oct. 29.

Roots and Shoots adviser Al Wachutka said it is impressive students are advocating for their futures.

“I think it’s important for everyone to have their voices heard, especially when it’s your future,” Wachutka said.

Goodspeed said the organization Climate Generation focuses on connecting youth with policy opportunities to give their voices a larger impact.

“We do a lot of coalition work to try to pass climate change policies that are a apart of the solution and then how to bring youth voices in so that it’s not all adults making decisions for youth,” Goodspeed said.

Roots and Shoots member junior Zoe Younger said Climate Generation was successful in creating an outlet for youth to express their opinions through the march.

“I think that (giving youth a voice) is important because we’re the ones who can truly make change in the world. Since this is our future we should really be the ones advocating for change,” Younger said.

Christiansen said she organized a table for iMatter, a youth climate movement. She said she reached out to numerous organizations to attend the rally, which gives people ways to take direct action.

“Having campaigns to get involved in and ways to sign letters and write postcards to politicians gives you really direct ways to take action and show politicians that this is what we care about and this is what you need to consider,” Christiansen said.

According to Christiansen, involvement in the fight for climate justice extends beyond the youth march OCt. 28.

“A super accessible way (to get involved) is Roots and Shoots. Roots and Shoots meets every Tuesday morning for about 40 minutes,” Christiansen said. “We do a lot of stuff with different organizations.”