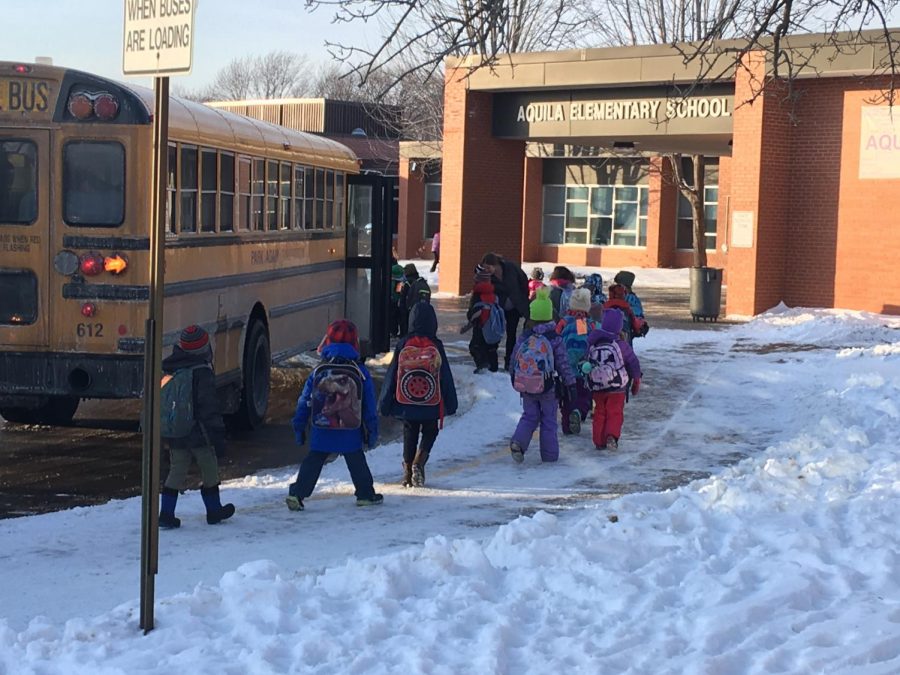 Students from Aquila board busses at the end of school Feb. 1. Students were late in leaving school due to an extended evacuation because of a sprinkler head burst.

“It smelled bad because of all the water,” Mayer said. “I saw that some of the ceiling was on the floor, by where all the water was coming from.”

According to St. Louis Park Public Schools superintendent Astein Osei, Aquila Elementary School was evacuated from the building at 3 p.m. Feb. 1 after a sprinkler head broke, causing the fire alarms to go off and flooding in the main entry area. Osei said the rupture was due to the recent extreme temperatures.

According to Osei, an extended evacuation took place, so all students and faculty went to the emergency evacuation site at the Texa Tonka bowling alley.

“Thankfully it happened at the end of the school day, so by the time students got back, they were able to go back to their classrooms and get their belongings and get on the bus or go with their parents,” Osei said.

Second grader James Mayer said the elementary students spent most of the time in the cold, walking toward Texa Tonka.

“Right after we got to the bowling alley, the teachers were like, ‘Listen up, we are going back to the school,’ and I was like ‘What, we just got here’” J. Mayer said.

Mayer said many students, including her, were not aware of why the fire alarms had gone off.

“At first everyone thought it was a fire, but then I used logic and started telling people that didn’t make sense. When we got back to the school we all thought it was gas because it smelled bad,” Mayer said. “Some people thought it was acid. I didn’t know it was water until my mom told me.”

According to Osei, similar incidents have occured within the district this week that were not in classroom spaces.

“On Saturday there was a sprinkler head that broke in the media center at the Middle School. We had one break yesterday at Susan Lindgren,” Osei said. “Not all of them were to the same degree, some of them were smaller, some of them produced more water.”

“In talking to the fire department, it appears this is not just happening in the St. Louis Park Public Schools, but rather all around the city,” Osei said. “I would anticipate that this will continue to happen through the weekend as it warms up and the ice that has been built up in some pipes start to melt.”

Mayer said students were outside for 30 to 40 minutes during the emergency and huddled together to stay warm.

“I wondered why we couldn’t go to someone’s house, like my friend who lives near the school,” Mayer said. “All the ‘Seussical’ people got Dr. Seuss hats today. So we all had them on. Me and some friends gave the hats to people who didn’t have hoods, because we didn’t need them at the moment.”

In light of the several broken pipes, Osei said the district is taking steps to ensure there is no further damage to sprinklers.

“We are going to have the fire alarm and sprinkler company come out and do an assessment of our sprinkler heads this weekend so that we can be sure we don’t have any cracks or damages,” Osei said.