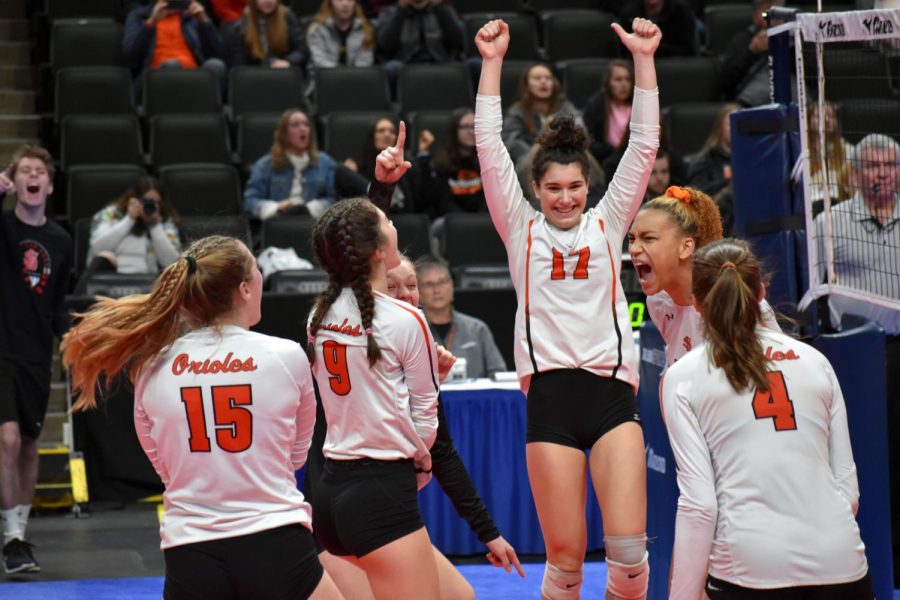 Following the loss to Eagan Nov. 7, Park volleyball made a comeback in the Minnesota State High School Tournament with a win against Moorhead Nov. 8.

According to coach Whitney Meierotto-Simon, the game against Eagan helped them adjust to the high-stress environment of State.

“We used yesterday’s game as a, ‘hey, it was our first time here — the arena, the fans, the game.’ I mean it was Eagan they are a good opponent.

Meierotto-Simon said she has been training the players to remain positive, regardless of win or loss.

“When I came (Park), we were trying to get rid of all the negativity, all of the negative thoughts. Ultimately, volleyball is a game of errors. If you’re holding on to your errors, then all you’re going to continue to do is make more and more,” Meierotto-Simon said.  “As a coaching staff, we have pushed them to stay positive no matter what because ultimately, you have to forget what had just happened and move on.”

According to senior captain Makaila Winward, the team strives to remain optimistic through difficult points in a match.

“We just focus on one point at a time, and if the point doesn’t go our way, there is always another one right after that,” Winward said. “(We try to) stay in the mindset of, ‘there are more points to play.’”

Sophomore Liam Rapp was happy with the outcome of the match and thinks Park really allied with Minnetonka.

“It was crazy. I think our chants were a lot more on point today than yesterday because we obviously had more time to practice it. Especially when we moved over to see the Minnetonka and Eagan game, because we connected with Minnetonka,” Rapp said.

Winward said she is happy with the team’s overall performance.

“I don’t think there was a certain point (that defined the match), but we played really scrappy and got a lot of balls up that we don’t normally get up. That made us really excited,” Winward said.

The consolation bracket championship game will be at 9 a.m. Nov. 9 at the Xcel Energy Center against Lakeville North, currently seeded first in the consolation bracket. According to assistant principal Jessica Busse, the school will not be providing bus transportation to Saturday’s game.