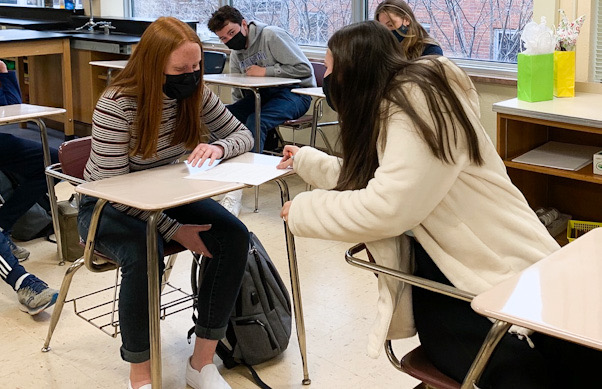 Juniors Marley Miller and Ava Hanson collaborate in their IB Biology class. Director of Curriculum and Instruction at St. Louis Park Public Schools Patrick Duffy said all students will be required to take an advanced course during their time in high school.

As junior Li Livdahl learned more about the school system and racism in America during her summer internship, she wanted to run her own research on advanced classes and the gifted and talented programs at Park.

Livdahl joined other students and staff in an effort to diversify the enrichment programs and advanced classes in Park. Director of Curriculum and Instruction at St. Louis Park Public Schools Patrick Duffy said students and staff have been developing ideas on how to progress the practices.

“For the past two years, we have had a number of teachers around the district working on research around improving practices for students and how to create programs that are going to better serve all students in our schools,” Duffy said.

In middle school, all students will take Keystone, an anti-racist student leadership development class to help students learn how to facilitate courageous conversations about race. In addition, Duffy said students in high school will take at least one advanced placement college class before graduation.

Over the summer, the internship that six high school students worked on inspired the new changes and implements that are coming to Park, according to Duffy.

“They made recommendations to our whole staff about things that we should do differently in the district. And we took those high school students’ recommendations very seriously, and tried to incorporate them into our plans. So I say that many of the changes we’re making are student driven,” Duffy said.

As part of the internship, Livdahl put together a presentation for several staff members with solutions she wanted to see the school implement.

“One of our big ones was trying to hire more teachers of color, because a really big part of wanting to do higher classes is to see teachers that represent you and actively encourage students of color to take higher level classes, and do training and professional development around racial equity and being more aware of that,” Livdahl said. “One of the other big ones is we wanted them to reconsider how they did GT and kind of almost get rid of the program or reform it so it’s not elitist because that’s the feeling we got from a lot of students.”

Duffy explained how research has shown that students with access to enrichment programming and gifted and talented programming are found to be more brilliant and successful in school than their other peers who did not.

“We want every child to have access to that sort of programming. Definitely not just the select few. We want all children to have access to advanced coursework at the high school,” Duffy said. “Every elementary student, from kindergarten through fifth grade is going to have talent development. And that talent development will help students develop their giftedness in areas of passion, focus particularly on science, technology, education and Human Development, the arts and math.”

Sophomore Alana Weiser said despite efforts from the school to make advanced classes more diverse, she believes there is still more work that can be done.

“I think less kids are in these classes because they don’t feel included, and if they want to be with their friends that end up taking regular classes,” Weiser said. “The advanced classes are not as diverse as regular classes, and they definitely should be, (the school) has tried to make it more diverse, but certainly not enough.”

Duffy said along with the new additions to the curriculum, every teacher is going to continue to get coaching on how to be more racially inclusive in the classroom. Furthermore, student interns such as Livdahl will continue their research to make Park more inclusive. The district is also bringing in Dr. Yevette Jackson and Gloria Ladson Billings, who Duffy said are some of the top culturally relevant scholars in the country, to train teachers.

Duffy said another addition the district is looking into adding new languages such as Arabic, Mali, Mandarin and Ojibwe.

“This can be a game changer for our district, and I’m excited about the work our teachers did and our students did,” Duffy said. “I think they’ve been very forward thinking, and they’ve been thinking about racial equity and about how to make our district world class.”