Business made for helping graduating seniors 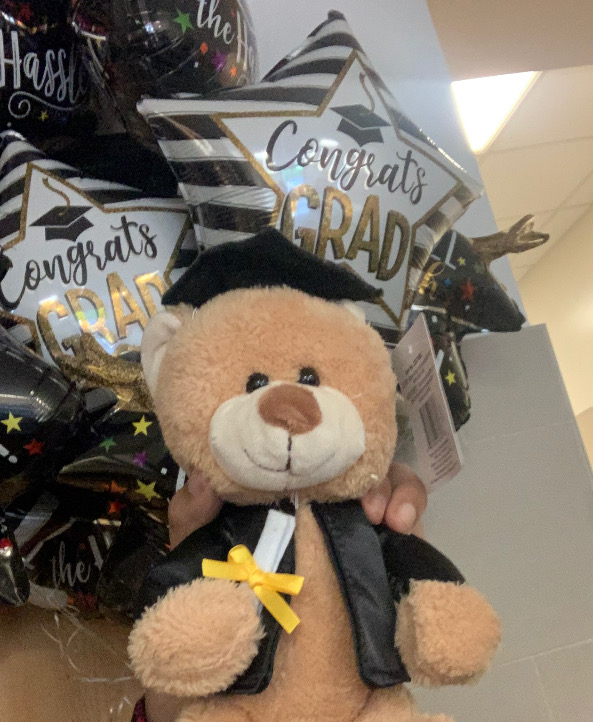 For business innovations class, a group of students decided to base their final project on providing gifts and mementos for graduating seniors. The aforementioned gifts include notes, flowers, teddy bears among many other choices.

According to sophomore Nevaeh Dobyne, the idea behind this project was inspired by the struggles of COVID-19, and its impact on seniors.

“Grad Grams is both our business name, in a sense, and the things that we’re selling — there’s a total of seven products that we’re selling specifically for people like, friends, family and staff to buy for seniors, and they’ll pick it up on June 4,” Dobyne said. “What really made us come up with this idea was just the thought of seniors, it’s been a really rough year for a lot of them.”

Sophomore Unique Nolan said her group wanted to give the opportunity to families and friends of seniors to buy gifts for them, in an easy, accessible way.

“It’s a business that we started so that seniors, on their graduation, get gifts,” Nolan said. “First of all, we wanted to be fair and our overall goal is to make sure that basically every senior would get something to go with them on graduation day.”

Members in the group — the sales representatives — were tasked with finding viable customers, and Dobyne said teachers actually were the biggest patrons.

“Teachers look forward to it, basically, a lot of (them) are the biggest motivators here, because they’ve watched these kids grow from freshman to senior year, so when you reach out to them, they already have people they’re thinking of and they tend to put a lot of time and thought into their notes and their gifts,” Dobyne said.

According to business innovations teacher Abigail Lugo, Grad Grams was like nothing they’ve done before, as it was treated more like a franchise — different from the independent businesses students have created in the past.

“We had to kind of think differently than we normally do, and so this year I was very hesitant,” Lugo said. “My goal is always just that they get hands-on experience of how to run and operate a business, everything from concept of the idea, to writing the business plan, to doing actual work.”

Though challenging at times, Dobyne said reaching out to customers and figuring out the products they would sell in the initial stages were the toughest parts.

“It’s always a little competitive, honestly, and I find it a little nerve wracking to talk to people, especially students individually,” Dobyne said. “I feel like as a collective group, we had to figure out what we should use — like writing notes and stuff like that. So, mainly just the planning of it all (was challenging).”

Excited for the seniors to see their surprises, Nolan said she is satisfied with the project and with the positive reaction from the community.

“This is important for me, so that the seniors can look back and that they can have something that they like,” Nolan said. “The (community) seemed pretty happy about (the Grad Grams), and were like ‘what is this?’ and were just asking questions about it — I think it’s nice.”