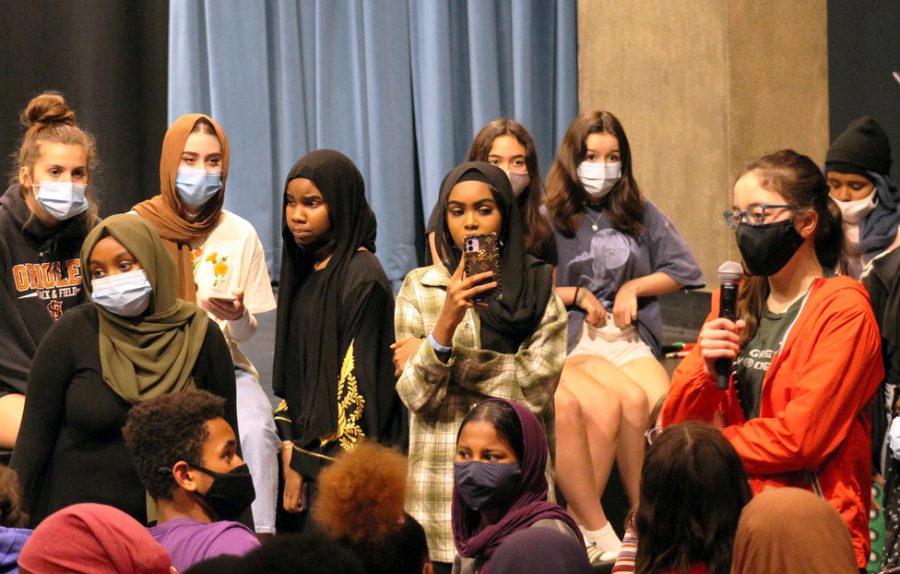 Freshman Sadie Livington speaks her opinion about the events happening in Israel and Palestine June 1. Students were able to speak at the open forum which happened during 4th hour and Park Connections.

As the Israel-Palestine conflict has become more heated, more students have taken to social media to voice their opinions. Senior Muna Sharif, along with some friends had the idea to plan a forum at school.

After planning and setting up for the forum, Sharif said although it didn’t fully go as planned, she felt like the talk was successful.

“The girls who planned it with me, were kind of being very immature. I talked to them prior to this, telling them if you don’t agree, be respectful and no cussing,” Sharif said. “But I think the discussion went well, there was a lot of back and forth and there were a lot of people who wanted to speak.”

Students gathered during fourth hour and Park Connections in the auditorium, where a presentation and open mic was facilitated June 1.

Senior Adin Zweigbaum said aside from the feeling of disinterest from some, overall he felt as if it was effective.

“I love the idea of open forum speech, listening to others and understanding others opinions,” Zweigbaum said. “I did feel at times that some people didn’t really care to hear what me or my friends had to say, which is okay, there’s a lot of conflict there — there is a lot of depth to it so not everyone wants to hear everything. But overall, I thought that the idea of it was very good.”

Freshman Fatima Ghandour said she believes more organization could have been used to facilitate the forum to its true intention.

“It was kind of rushed and we needed maybe to plan it more,” Ghandour said. “It was all over the place because people that were speaking were disrespected, and we didn’t want that area to be a place where people are being disrespected. We want it to be a safe space for everyone. And it was just a little bit messy.”

As an audience member, junior Ella Roether said although the conversation was divisive, it was a step in the right direction to start more of these discussions.

“I don’t think today was super productive because it was a lot more argumentative and divisive compared to being a productive conversation where we can see both sides,” Roether said. “But it was a good start to opening up the conversation. It’s difficult to have a conversation about a very complex topic that’s been going on for a long time that’s happening across the world.”

According to freshman Siham Mohamoud, more time and planning was needed in order to have a completely successful conversation.

“We needed a lot more time, there was time taken away by some childish stuff when there could have been a lot of facts being said and there was a lot of bias,” Mohamoud said. “People needed to know that it’s not an argument, it’s just say what you need to say and move on, there’s no back and forth.”

Sharif said she hopes those who attended left with a new, or at least an understanding, of a different perspective from their own.

“I hope they learn new things. I hope they learned things they didn’t know about, and I hope the people who support Palestine also learn something from the Israeli point of view, that was the whole point, just to be more educated on what’s going on.

As people began forming a back and forth discussion, senior Jonah Smith said he thinks smaller spaces would have been more beneficial for this type of conversation.

“I wish there were breakout rooms of sorts, just because the crowd really had an effect, like for example I said something and I got booed. It’s hard to have a real discussion when you’re surrounded by a crowd of people,” Smith said. “I think it would have been cool if they brought less people in a couple of rooms, and then there you could really have a more advantageous discussion.”

Zweigbaum said to be able to start making change, people will need to stop being controlled by their emotions and learn how to listen to each other.

Since the topic has gained more media attention recently, Roether said people need to ensure that they are receiving a larger understanding of the conflict, rather than the single perspective they see on social media.

“It’s a lot of ignorance and not a lot of education has been happening. Just purely being educated through Instagram or false infographics that are spreading fallacies, which is really dangerous,” Roether said. “We just have to make sure we’re educating people and not just educating them about the Israeli side or Palestinian side but (instead) an overall education for everyone.”

Moving forward, Ghandour said she believes it is important to do more research and to be mindful.

“Just educate yourself and find out what the actual truth is because the media can really brainwash people,” Ghandour said. “Respect everyone’s opinion and speak with kindness and know what you’re saying instead of offending other people.”