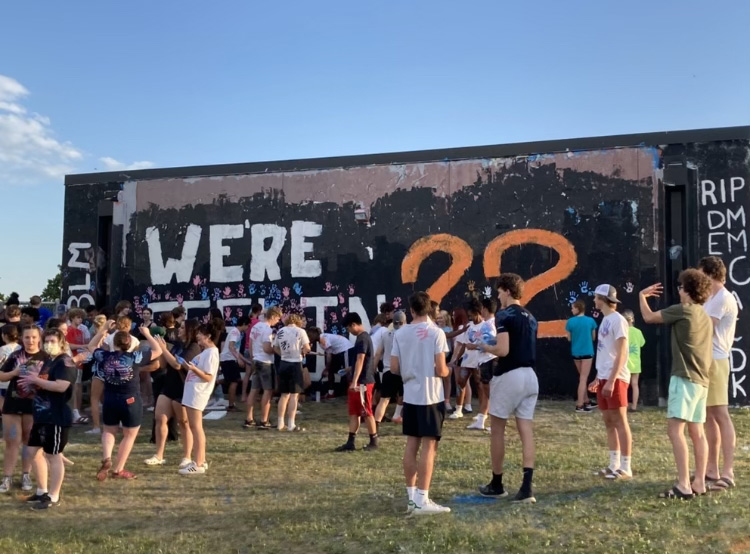 Students painting the wall and each other June 9. Juniors traditionally paint the wall every year after graduation.

Covered in paint, students milled around their newly painted wall — feelings of class unity in the air. For junior Grace Fahey, this tradition served as a way for her to connect with classmates again after a year of separation and struggle.

“It’s a super important tradition that I feel like should happen every year,” Fahey said. “It definitely makes your three years worth it — you can do it with your friends, take pictures and (make) a lot of memories.”

It’s a yearly tradition for the juniors to paint the wall after graduation. After a long, trying year, the Class of 2022 was eager for their turn. Student Council organized the event for the night of June 9. The design they chose featured the words “we’re feeling 22” — lyrics from the Taylor Swift song “22.”

Looking forward to his future as a senior, junior Kris Moe acknowledges the accomplishments of the year and optimism towards the next one.

“It’s exciting that everyone gets to see everybody again — it shows that we’ve made it through this year,” Moe said. “That’s an accomplishment. And we’re gonna go conquer (it) next year.”

Although her participation in the event was required, Student Council vice president Fahey admitted she was also there because she loved the tradition as well.

“We can actually do something together (as a class),” Fahey said. “It builds relationships (between) a lot of different people that maybe you wouldn’t talk to in general at school.”

Similar to Fahey, junior Rosie Montero-Ward said she appreciates the sense of community provided by the event through the shared excitement and teamwork.

“It’s a pretty good way to keep us all connected and help us bond as a class,” Montero-Ward said. “It’s a good way to make memories and ruin some clothes.”