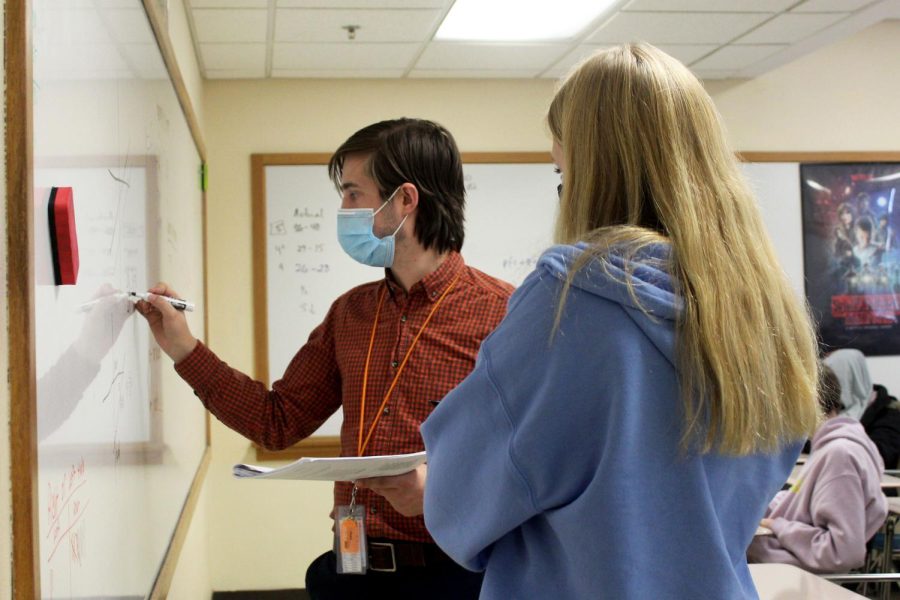 Walking towards the auditorium where multiple classes sat waiting, building substitute Tori Bohn had no idea what to expect. According to Bohn, hosting several classes in an untraditional space is not ideal, but it is necessary in light of the current substitute shortage at Park.

“We had four classes (in the auditorium) at the beginning of the day and then, thankfully, we got someone to cover another classroom at the last minute from the Teachers On Call program but it’s still crazy,” Bohn said. “We have to do it so we’re not running around the building with one teacher going to all these other rooms, taking down signs telling students where to go.”

Bohn is one of three building substitute teachers at Park, but when additional help is needed, the program Teachers On Call provides supplementary teachers. Senior Natashia Johannes said in addition to having a different teacher, the different environment changes the way the class will turn out.

“It’s especially weird to not have your teacher be there and have to go to a room with a whole bunch of other classes,” Johannes said. “It definitely cuts down on productivity, and makes it harder to focus on the stuff that you’re supposed to do.”

Junior Gunnar Anderson said even though substitutes can’t fill in for a full lesson plan, classes are still manageable since they can do work from the past days.

“The sub obviously doesn’t know as much about the material they’re teaching so it’s not going to go as well but it’s still something because you’ve got whatever the previous teacher assigned for the segmentation,” Anderson said.

Every student bringing their own Chromebook and having most lesson plans posted online eases some of the obstacles substitute teachers would regularly face, Bohn said.

“One thing that has helped for both subs and students in the classrooms is having a one-on-one computer and all of the plans online,” Bohn said. “When a sub is placed somewhere last minute, there’s been some good coming out of that with where we’re at with the stress of last minute.”

Senior Ethan Robeck said substitute teachers in regular situations already struggle with maintaining control over the class. When classes are grouped together, Robeck said he believes the struggle worsens.

“In general, one sub is usually just disrespected, they have to try extra hard to get the attention of the class,” Robeck said. “I feel like having other classes at the same time; it’s probably more difficult for them.

Bohn said she is sympathetic toward students’ feelings due to the uncertainties that come with having a substitute for the day.

“I feel bad for students mainly because they don’t really know if they’re going to be in their room or the auditorium or in some other classroom that day,” Bohn said. “And the passing times are already so short just with how our building is set up so it can be a little chaotic.”

Johannes said the unanticipated change that comes with a teacher being out and being grouped with different classes, accentuates the issues and unproductivity of the classroom.

“I usually think that having a substitute teacher makes it less productive but having the classes combined amplifies it in a worse way,” Johannes said. “It seems very last minute too, so it’s harder for the substitutes to actually pass on the information of what the class is supposed to be doing.”

Robeck said although his physics class was supposed to be completing an assignment, due to the circumstances, the motivation was lost amongst students.

“We don’t want to do anything. I don’t think we’re taking a quiz right now and we don’t want to because we’re just confused — It’s not the right environment,” Robeck said

Bohn said she understands the frustration of having a substitute teacher, and wishes for students and staff to recognize that substitute teachers are often trying their hardest to give the best education experience.

“We just want to be here to help, we are giving you guys our time so that you don’t have to be as stressed out and we just want to be there for you,” Bohn said. “It’s just a good cycle to have that connection of just understanding.”