Legislators in all states should abolish the caucus system and institute a policy of open primaries. This will prevent peer pressure and inaccessibility from polluting democracy.

Caucuses take place in 13 states, including Minnesota, according to the New York Times. Each state’s caucus is one-of-a-kind, and sometimes rules vary even between parties. For example, in Iowa, the Democratic and Republican caucuses are very different experiences.

At Iowa’s Republican caucuses, voters make their choice by secret ballot. Once they’ve voted, they can leave — unlike the Democrats. 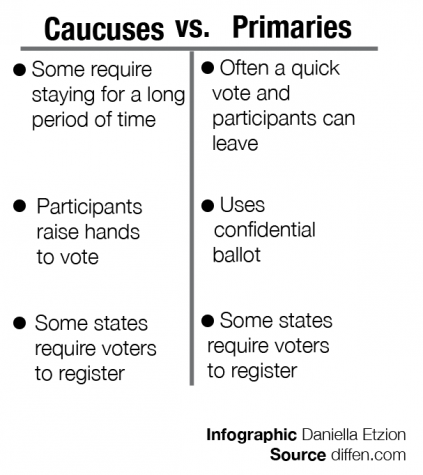 According to a video created by Vermont Public Radio, Democratic voters physically choose sides and debate among themselves, trying to persuade others.

This public display of preference may lead to unnecessary yelling and obscene conduct, as displayed in a video taken by YouTube user Scoopt. Voters should not be attacked for their views while exercising their Constitutional right to vote. If someone wants to debate Hillary vs. Bernie, they can seek that out for themselves. Allowing these fights leads to subjective results, because no one really knows if the percentages are a result of peer pressure or actual preference.

Caucuses are further complicated when participants must stay for the entire procedure, like in Minnesota. At my caucus in March, lines opened at 6 p.m. and if people weren’t in line by 8 p.m., they couldn’t vote — with no exceptions. We chose our candidate on handmade, write-in ballots, and voter registration wasn’t required.

I could have voted multiple times if I wanted to, and even gone to the Republican caucus as well. After all of this, I realized the research I did to prepare for my first caucus gave me different information than what I actually experienced.

In addition to the disorganization, there’s another problem governments must address. In 37 states, according to the New York Times, parties hold different types of primaries, which vary in their degree of openness, or who can attend. In a closed primary, only voters registered with a certain political party can vote in that party’s primary and independents can’t participate at all.

This is outdated, and perpetuates the idea that politics are black and white. Without the freedom to define political affiliation on a spectrum, the system forces a partisan attitude. No one is simply right or left.

The 14th Amendment and the Voting Rights Act grant every citizen of this country the right to vote unobstructed. Closed primaries and caucuses hinder the voting ability of many Americans. This is unconstitutional.

Creating a system of open primaries would allow anyone to participate in the political system that was designed for their use.