Staff Editorial: A school full of trash wasting away 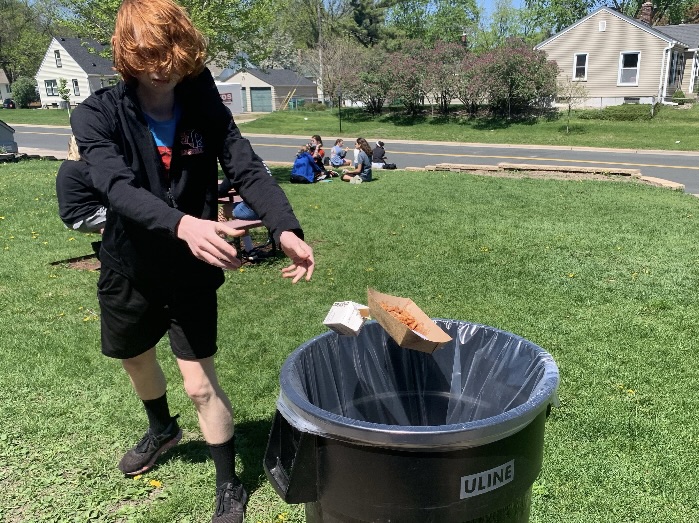 Sophomore Silas Cowell disposes a lunch tray May 16. Trash cans are available throughout the school and outside for students to use.

Pieces of trash that the Board has seen include: raw eggs that had been cracked and splattered in the hallway, sushi containers (with the sushi around the container), e-cigarettes and piles of paper towels that rival trash cans in height. Throughout the year, the Board has noticed increasing amounts of trash everywhere. It’s hard to walk through a hallway without seeing abandoned masks or spilled drinks on the floor; there’s often trash that will lay on the floor for days without moving.

The Board feels that the amount of trash at Park has started to cause concerning problems. Students have noticed an increase in ants, silverfish and rats within the school. There’s also been an increase in squirrels around school grounds, which makes exiting the parking lots harder. With an increase in animals and bugs, the Board is concerned that Parks littering problem is leading to an unclean and potentially hazardous environment for students.

Furthermore, the Board is raising concerns about how the increase in Parks littering and animal problems may impact the number of incoming students. No one wants to go to a school if they see it’s full of trash and ants, and Park is becoming more and more full of trash.

With such a problem, it’s hard to see why this issue hasn’t changed yet. However, the Board feels Park has several aspects that enable littering. While there are many trash cans within our school, there’s a lack of trash cans around Park’s parking lots. Many kids leave trash in the parking lot because there’s nowhere to throw it outside, and they don’t feel like carrying it inside.

The Board has also noticed that many trash cans are full by lunch, which leaves fewer places for students to throw away trash in the later half of the day.

Because Park has a small number of custodial staff, it’s often impossible for them to empty all the trash cans in one day. The Board acknowledges the custodians and teachers efforts to empty trash cans, but feels that consistent emptying of trash cans would help reduce littering.

Furthermore, students are more likely to litter when there are no consequences. The Board feels that the lack of accountability when it comes to littering enables students to continue doing so

So what can we do? The Board proposes a few solutions. There needs to be more action from the administration: a reminder to not litter is clearly not enough. The administration also needs to support teachers and give them clearer methods on how to address littering.

However, what’s most important is self awareness. Students are failing to take responsibility for the littering they’re causing. The Board unanimously agreed that the most effective way to stop Park’s littering problem is self accountability. Students need to begin to throw away their trash responsibly and hold their peers accountable. While calling a peer out is uncomfortable, change has never been easy.