Advancement encourages Myszkowski to use his voice 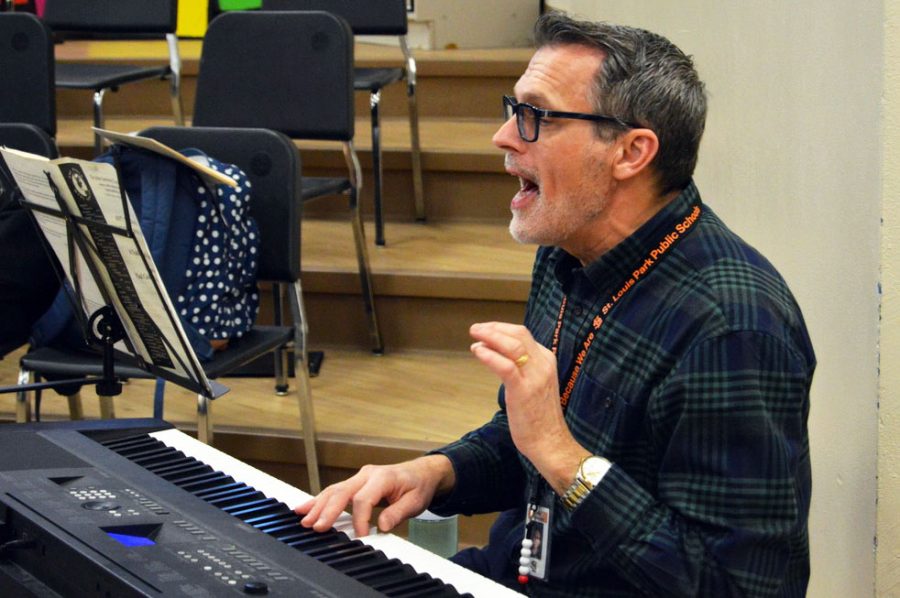 Choir teacher John Myszkowski teaches his zero hour class March 3. Zero hour gives students the opportunity to take choir if it does not fit into their regular schedule.

When reflecting on progressing to a semi-finalist in the Minnesota Teacher of the Year competition, choir teacher John Myszkowski said he realized this was a great opportunity to speak on his passions.

“I have to make a short video and was given the prompt of ‘what do you think are the major equity issues in Minnesota schools,’ which is something I am very passionate about,” Myszkowski said. “The issue I am going to address is teachers’ implicit bias.”

Implicit bias is an unconscious use of applying stereotypes to people’s understanding. According to sophomore Dayanara Mora Zengel, Myszkowski follows his beliefs in class.

“During class, Myszkowski is always very passionate about giving everyone equal opportunity, which pushes me to participate more,” Mora Zengel said. “He definitely earned this chance to express his ideas to a wider audience.”

According to Myszkowski, advancing gives him the chance to address situations that are not talked about often.

“Schools have had a harder time addressing equity issues,” Myszkowski said. “I feel responsible to present my thoughts in a way that will be meaningful and impactful hopefully to other people.”

Mora Zengel said Myszkowski deserves this opportunity because his consistent willpower is motivating.

“He always gives a lot of energy and determination in whatever he does,” Mora Zengel said. “His passion inspires me to be better.”

“He teaches with positive reinforcements, which helps encourage students to be better instead of making them feel defeated,” Scott said.

Myszkowski hopes to show his students that everyday people can make an impact on certain issues.

“I still struggle the same way every other teacher struggles, but even with those struggles I have a voice to use that addresses issues in schools,” Myszkowski said. “I hope my nomination will show people that we all can make the world better.”