Skellyton Upcycle on the rise 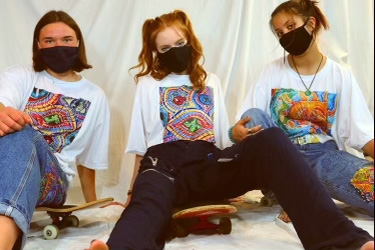 Used with permission from Ciera Skelly.

Although painting her clothes started as a pastime in middle school, senior Ciera Skelly said she has now turned it into her own brand: Skellyton Upcycle a reality.

“I’ve always made clothes for myself and then people thought they were cool, so I told them they should buy them,” Skelly said. “Due to quarantine, I’ve had nothing else to do, so I thought I should make something out of that.”

Senior Liberty Powers said Skelly has always been an outstanding artist and she believed in the potential of her art and encouraged Skelly to start selling it.

According to Skelly, she doesn’t have big plans for the future of Skellyton Upcycle, keeping her brand alive is all she wants.

“I want to just keep it going and keeping it from not dying, that’d be cool. I don’t expect it to get huge, but if it did, that’d be cool too,” Skelly said.

According to Powers, Skelly’s art has the perfect opportunity to grow now more than ever due to the pandemic.

“She’s just (been) making really cool stuff lately and she decided to start a brand,” Powers said. “Especially with Corona right now, she just had a lot of time on her hands, so there’s never a better time to do it than now.”

According to Skelly, she is currently running her whole brand by herself, but she is still receiving support and help from her friends.

“As of right now, I’m the only one making the clothes, but I got all the people that are helping me modeling and supporting me,” Skelly said.

Powers said how she wasn’t truly involved in Skellyton Upcycle until Skelly invited her to model.

“She pretty much just called me up the other day and was like ‘hey, do you want a model for it’ and I said ‘yes of course,’” Powers said. “But up until that point, I really wasn’t a part of it at all.”