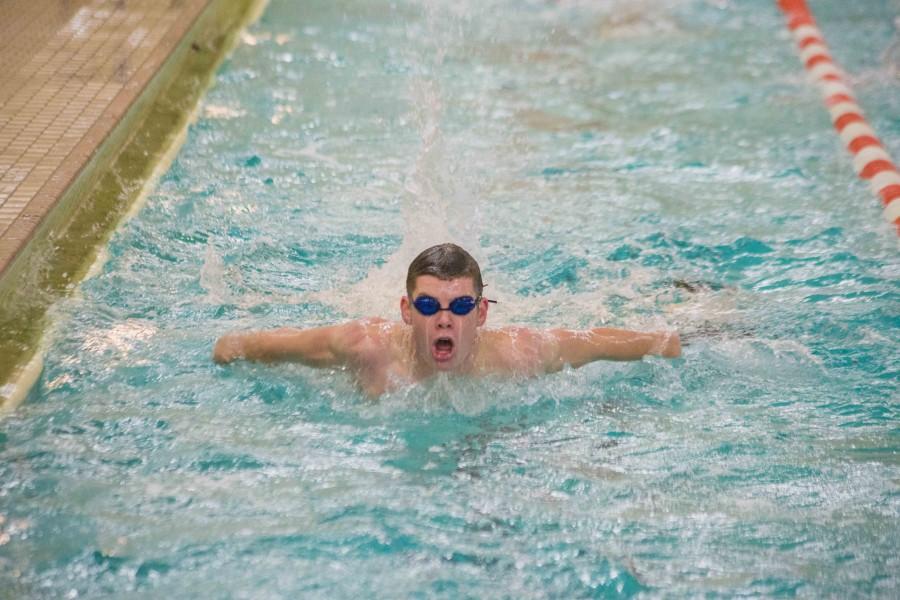 Senior Ryan Casey finishes a lap during a warmup at his home pool during practice on Dec. 3

Boys’ swimming starts off their season with a relay meet consisting of unusual events, such as a t-shirt relay, against the entire West Metro conference.

Head coach Amanda Forsberg said she believes the first week of practice solidifies how the swimmers will compete in the relay meet.

“The first week of practice lets us see where everyone is coming into the season so we will have an idea of where we need to go,” Forsberg said. “It also allows us to see where new swimmers are. We use that week to gauge their level so we can put them in events they will succeed in.”

Senior captain Ryan Casey said he believes the young team will help the team in the upcoming relay meet and throughout the rest of the season.

“We have the youngest team we’ve had in the past six years,” Casey said. “I think we’ll have more energy and a very competitive atmosphere because the younger kids have so much room to improve.”

Although the younger swimmers have room to improve, Forsberg said the relay meet gives the older swimmers room to have some fun.

“The meet gives me a chance to put some of the more experienced swimmers in more fun events and have them take a leadership role to some of the newer and younger swimmers,” Forsberg said.

According to Casey, Chaska-Chanhassen will be tough competition.

“Chaska-Chanhassen will be the toughest competition we face at the relay meet,” Casey said. “Chaska or Chanhassen alone would have more guys than us, but they are together, which makes for very tough competition.”