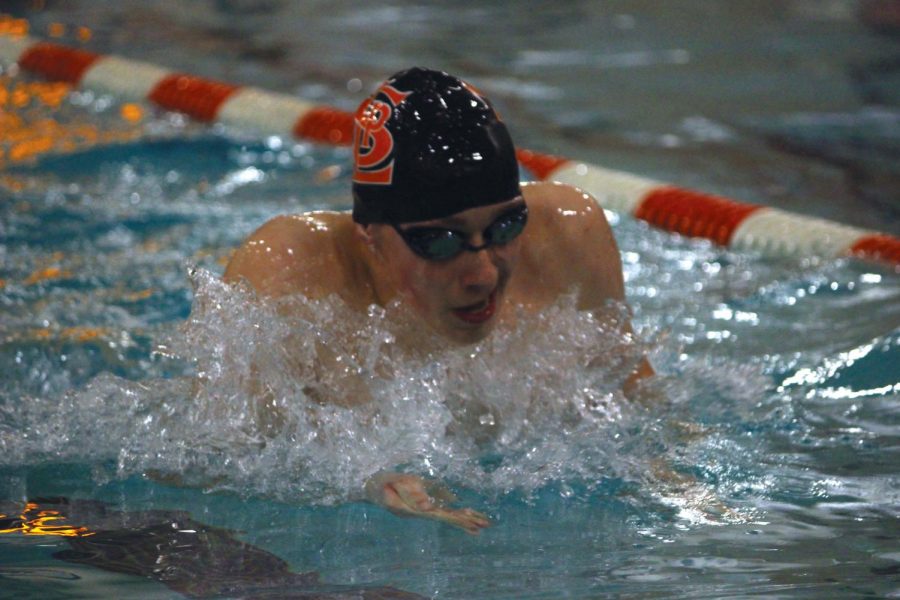 “(The team) did really well. Hayden Zheng won the 100 breast. I don’t think we’ve had a State champion for 10 to 15 years, at least not while I’ve been coaching here. Alec Pittman did really well in the 500 free. He broke his own team record by 11 seconds,” Forsberg said. “The medley relay qualified for consolation finals, and Luke Anderson made State for the first time in the 100 back which was huge.”

Junior Will Halvorson said the team preformed well and felt great about the season’s finish and the road to it.

“We did really well overall, we had some of the best swims of the season, everyone was happy with their times,” Halvorson said.

Freshman Hayden Zheng said he was happy with his times at State and loved the competitive atmosphere.

“I’ve been competitively swimming for eight years and high school State is like none other. Just the intensity and noise. It’s so loud and the overall atmosphere is just crazy,” Zheng said.

According to Forsberg, along with his individual state title in the breaststroke, Zheng took third place in the 200-yard Individual Medley with another All-American Consideration time of 1.50.57, an event which includes four strokes, the butterfly, backstroke, breaststroke and freestyle.

Forsberg said she feels proud, and glad the season ended on such a positive note with the State meet.

“Obviously I was thrilled for Hayden, that’s a huge accomplishment. In general, we swam really well,” Forsberg said. At state even to have more swimmers qualifying, it was fun to have more people there. It just creates a great atmosphere at the end of the season.”

Junior Henry Hein said the mutual hardships faced by swimmers during the season brought him closer to people on the team.

“Swimming has brought me closer to friends. There are always those hard practices you have to swim through, and they are always horrible, but when you have friends there it makes them that much more enjoyable,” Hein said.

According to Forsberg, both individual swimmers and team events placed well at the meet.

“The first 100 you swim feels like the most amazing thing on the earth, then your body cramps up immediately and the next 800 is really hard, but the first 100 is awesome,” Recknagel said.

Hein said a personal goal of his is to return to varsity section competition in the future.

Zheng said he is looking forward to the next season and will miss the seniors who are graduating this year.

“Next year we’re graduating two guys and they are very strong swimmers, some of our best swimmers. I think we need to keep up the hard work that we’ve put in this year and just keep up our team atmosphere,” Zheng said. “If we just keep up that fun mentally while still swimming fast, we’ll be successful.”