Boys’ tennis defeated by number one seed Blake in Sections 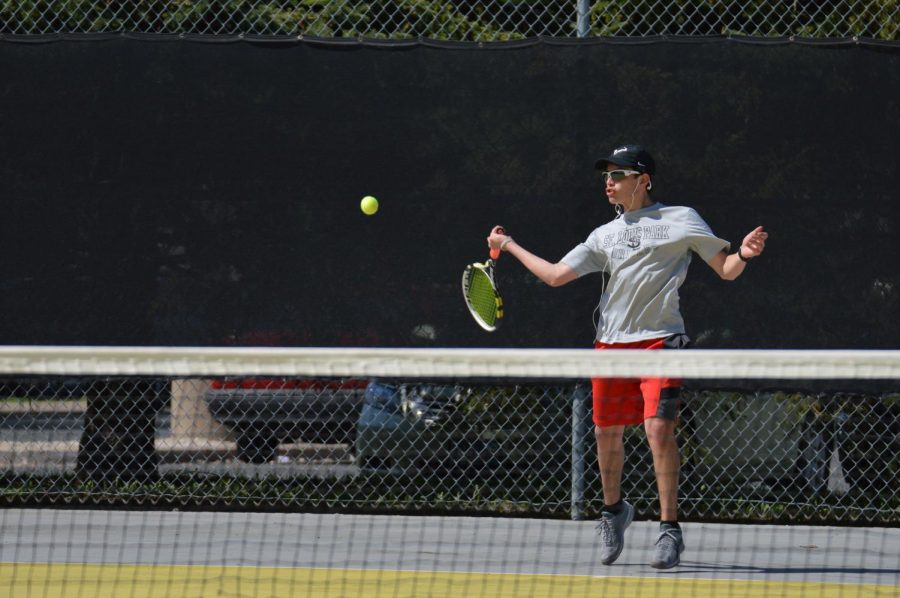 Junior Isaac Swartz hits a forehand shot in preparation for sections. The team won against Apple Valley 4-3, then lost to Blake 0-7.

After clinching a 4-3 home win against Apple Valley May 16, the boys’ tennis team was swept 0-7 against number one seed in the conference, Blake, according to head coach David Britenbucher. Britenbucher said while the season went well, the most important issue is recruiting players for the future.

“It’s hard to be disappointed about how things went. The biggest thing is numbers, we need numbers,” Britenbucher said. “We had nine guys on JV this year when they were full. Ideally I’d like to get twelve on JV, 12-13 on Varsity and get the numbers back up to the mid-20s.”

Senior captain Adam Johnson said the team enjoyed turning the tables on Apple Valley after losing to them in Sections the previous year.

“Last year we played Apple Valley away and lost by a close score, so it was great this year to reverse that and take the win in a dramatic fashion this year,” Johnson said.

“(The Apple Valley match) went great honestly. It was really tight, but Sam Birnberg and I won the winning game to get to move on, so that was really exciting,” Perkins said.

Reflecting on the Apple Valley match, senior captain Sam Birnberg said it was one of his favorite memories of the season. According to Birnberg, the team was up 3-1, and after witnessing some questionable calls and some close games, the score was tied 3-3.

“We felt Apple Valley was not playing as clean. In my match my doubles partner, Collin Perkins and I ended up splitting sets, and so it came down to the last set for us,” Birnberg said. “Everyone was watching, the pressure was high, the season was on the line, and we ended up winning. To have that moment was awesome, definitely a memorable part of the season.” 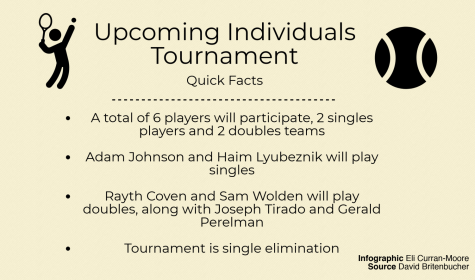 According to Perkins, the team anticipated the loss against Blake, the number one team in the state. Perkins said for him all his preparation and practice culminated in these final matches.

“Apple Valley was a highlight — it was a really big moment for the team. It was so close. Our season was about to be over but then we got to move on, we really got through the struggle and bonded as a team over that match,” Perkins said. “Probably one of the best tennis moments I’ve had over my high school career. We were totally expecting (the later loss against Blake), we tried our best and had a little fun with it too since it’s many senior players’ last match.”

Johnson said overall the condensed season caused multiple problems for the team throughout the early season, but players are still looking for more opportunities to compete.

“The season was much shorter and condensed then I had expected, the snow and everything made it a lot more difficult,” Johnson said. “We had a lot more matches canceled this year, which was unfortunate, but a lot of guys are still looking forward to the individual’s tournament.”

According to Britenbucher, two singles players and two doubles teams will play in the upcoming individual tournament May 24, also run by the State High School League.

“Now you get the individual stuff. Adam Johnson and Haim Lyubeznik will play singles at one and two, Rafe Coven and Sam Wolden will play one doubles, and Joseph Tirado and Gerald Perelman will play the other doubles,” Britenbucher said. “It’s single elimination, they crown a singles champion for the state.”

Johnson said he urges any new players with an interest in joining the team next year to give it a shot.

“I would really encourage anyone to come out for the team, this year we’re losing nine seniors, so come see what the team is about and give it a chance,” Johnson said.