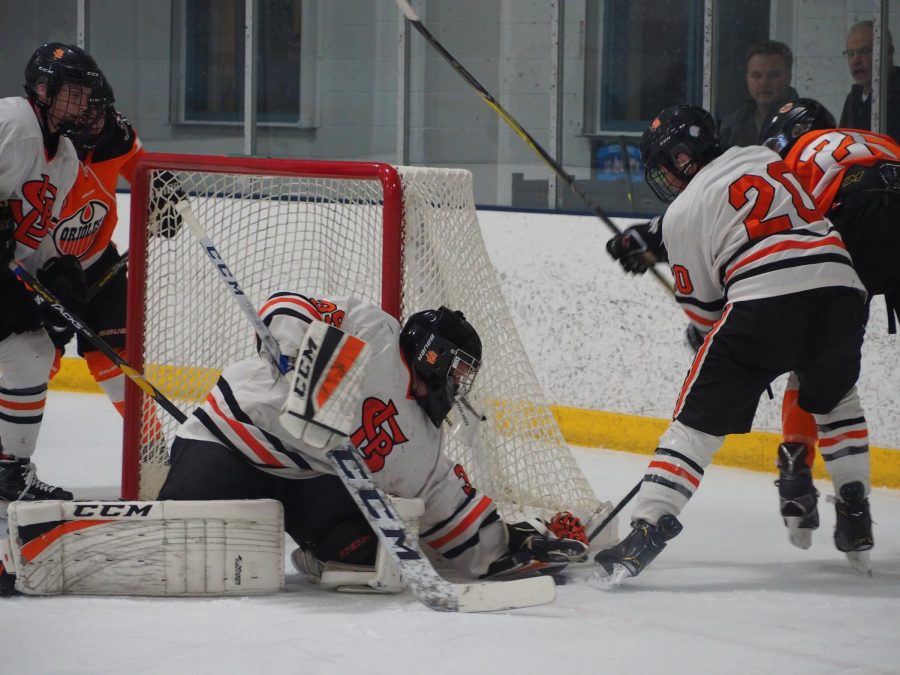 Sophomore Austin Amelse keeps Osseo player off the puck while Junior William Pinney picks it up to save a goal scoring opportunity.

According to senior Gerald Perelman, playing with grit and passion led him and his team to start with a 1-0 lead.

“The word we are focusing on this year is gritty, so working hard. That means even if it’s not the pretty play it’s the right play,” Perelman said.

The boys’ hockey team won 7-3 against Osseo at the Rec Center Dec. 4 bringing its overall record 3-0.

Assistant coach Zach Strouts said that following the quick response goal by Osseo making the score 1-1 forced the players to put their heads together to stay positive and score.

“We came back out at the second period and we were buzzing the whole time. I think they just needed to stay positive and stay at it,” Strouts said.

Junior, William Pinney a captain said despite the mediocre start the team only progressed as the game went on, and by the third period they could focus on closing out the game.

“In the third period we started playing as a team and capitalizing on our chances,” Pinney said. “I think we have to improve on discipline and intensity.”

Strouts said the tight goalkeeping by Pinney and overall team effort led the team in a positive direction.

“I think it was a good team effort in the second and third period. Will Pinney was stellar for us once again and once the boys focused on doing the little things right and doing their jobs we were 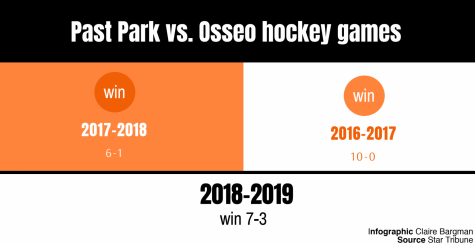 Team manager Jake Fobbe said that this win versus Osseo was his 200th win being part of the team. He said he felt a sense of accomplishment thanks to the team’s dedication to keep winning.

“It feels really good. I just wanted to get it done this year because all I needed was three wins this season and I was confident in our teams ability to take it home,” Fobbe said.

Strouts said the main two areas of focus for the team in the future will be to come out explosively in the first period and play more defensively.

“I think we need to work more on our defensive zone, we need to attack and have our centers help down low and be able to break the puck a little bit better,” Strouts said.

The next boys’ hockey game will take place against Minnetonka at 7 p.m. Dec. 6 at the Rec Center.