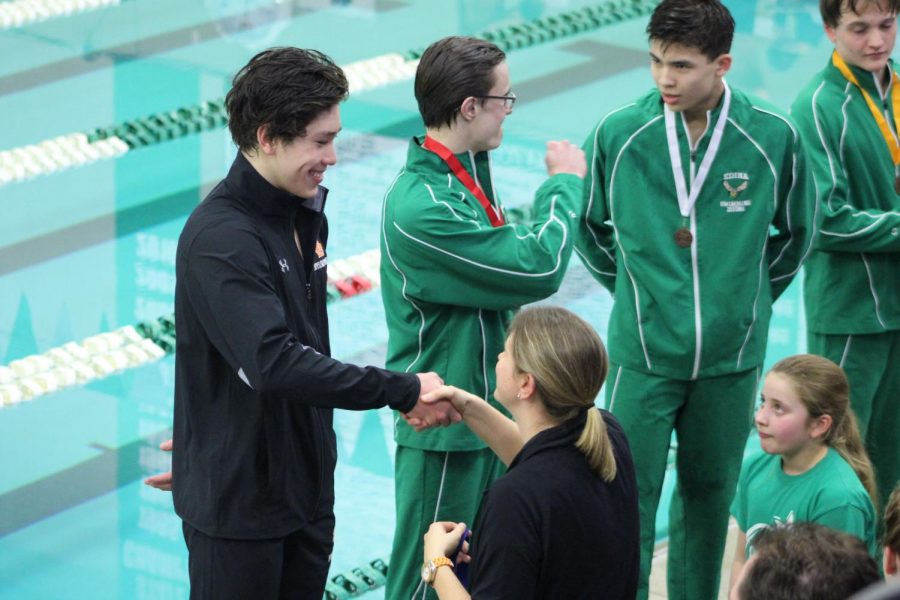 Hayden Zheng accepts first place medal for his performance in the 200 IM. The award was presented to him by math teacher Amanda Forsberg. The time of 1.56.1 minutes and place qualified him for the State meet March 1 and 2.

Despite countless snow days during the intense training season, coach Amanda Forsberg said the team stayed determined which contributed to its success at sections.

“I think they were really focused. It’s been kind of a grueling season. They have had to overcome a lot with the snow days,” Forsberg said.  “A lot of (the athletes), even on those snow days, went and practiced on their own, knowing that the end goal was always Sections.”

Despite not having a diving team to help increase their score, Boys’ swimming earned third place in the Sections meet.

“We got third at Sections, and we were only fifteen points away from Hopkins, and they had forty points in diving, so in straight up swimming we would have gotten second, which is huge for us,” Forsberg said.

Junior Will Schwietering, who qualified for state in the team’s relay, said the teamwork and commitment throughout the season produced the positive outcome at Sections.

“(The team did well from) just working together and really getting a bond with all the teammates and pushing each other together,” Schwietering said.

After Sophomore Hayden Zheng qualified for state and broke multiple pool and section records, he said the team performed better than he had ever seen at Sections this year.

“From my three years that I’ve been on the team, it was probably the best I’ve ever seen from our guys,” Zheng said.

Zheng said the majority of the team members competing in Sections improved on a variety of different times from throughout the season.

“A bunch of guys moved up places from where they were seated and everyone dropped times — might be their personal bests or their season bests,” Zheng said.

According to Forsberg, the majority of swimmers from Park dropped time in both personal events and the relay.

“Almost everyone had their best times of the season, if not lifetime best,” Forsberg said. “Hayden broke two Section records and two pool records at Edina, so that’ll be fun to see his name at Edina. Our relay broke our school record for the medley.” 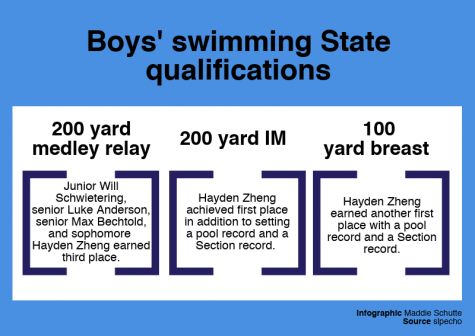 According to Zheng the high-intensity training throughout the season set the team up to have successful Sections meet.

“The training was unbelievable — some of the hardest training I’ve ever had, and I felt myself and the team get better every day. It showed at sections,” Zheng said.

Schwietering said the team has to concentrate on improving their strokes, like in the relay, in the week of practices leading up to State.

“For State, we have to keep moving on and focus on our goals and crack down on everything that we need to and polish up our strokes,” Schwietering said.

Zheng said he would like to see the team’s relays improve going into State.

“Going into State it will be me and our relays that qualified, so hopefully we can get better in our relays which would be really great and then hopefully make it back to finals,” Zheng said.