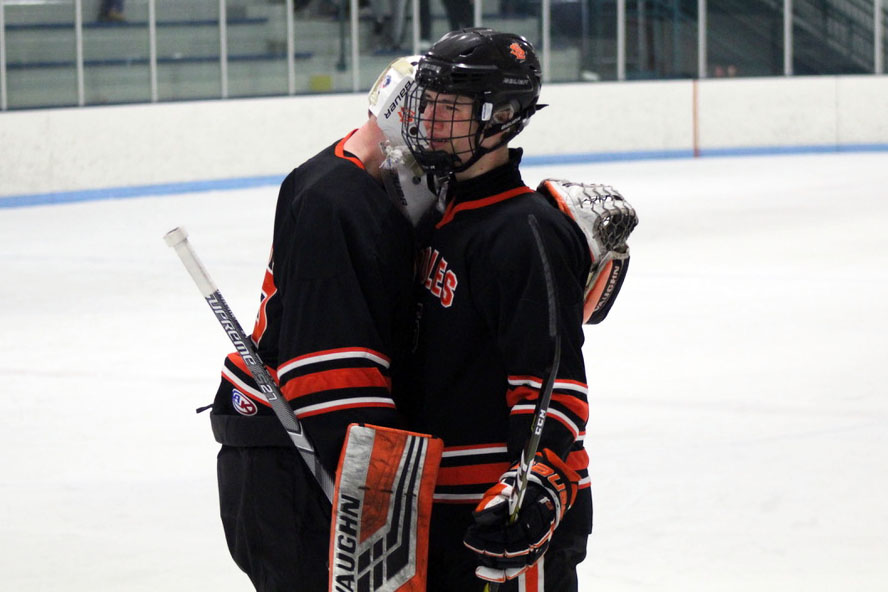 Seniors Jacob Johnson and William Pinney embrace each other following the Feb. 20 Sections loss against Cretin-Durham Hall. The final score of the game was 3-6.

After the Feb. 20 Sections loss to Cretin-Derham Hall, Park players gathered around each other on the ice in tears and in support of each other. Senior Will Pinney said the emotions were running high throughout the game.

“They were a really good team. The energy on the ice was unreal. It definitely was an emotional game. Last game for all the seniors, you know, last game for myself,” Pinney said. “I couldn’t have asked for a better city to play for and a better team to have.” 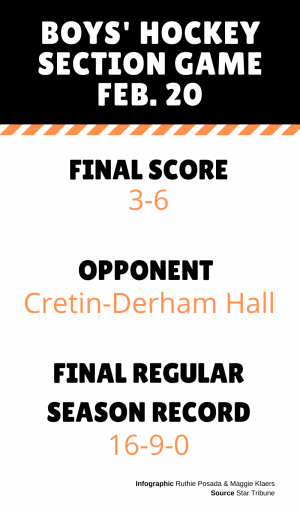 According to head coach Andrew Sackrison, the team’s successful year and winning record may inspire future generations of Park players.

“Having the success at the high school level funnels down to the younger players and association, so when you have a successful season like that, it’s a big deal for younger players to strive and want to work harder, put in more time to be better players and that just kind of organically grows,” Sackrison said.

Pinney said growing up and playing in the St. Louis Park Hockey Association created a unique bond among many of his teammates.

“We’ve been playing with each other for I don’t know how long, since (we) were like little kids and we got to learn a lot about each other over the years,” Pinney said. “We definitely had a lot of good times with each other, this year especially.”

“Just three years of kids, seniors, juniors and sophomores. The dynamic was great and everyone came together as the year went on. They just seem like brothers now,” Johnson said.

According to Pinney, the relationships within the team did not end with the final whistle of the Feb. 20 game.

Immediately after the end of the season, senior Jacob Young said the seniors were already discussing games they could come back for and watch from the stands next year.

“They’re definitely going to be there. Boys are already talking about coming to games next year. The team next year is probably going to be a strong team too,” Young said.

Although Pinney’s time in the net isn’t over just yet, he said leaving behind his long-time teammates will be bittersweet.

According to Sackrison, the relationships within the team are stronger than that of just ‘teammates.’

“They’re lifelong bonds to be honest and I still keep in touch with players from high school, so it’s a special thing to be a part of the the group long after you’re gone over here as alumni and we’ll come back and you’ll see the same guys. It’s definitely like a brotherhood mentality,” Sackrison said.

Johnson said his time playing at Park will continue to impact him, even as his hockey career comes to a close.

“There’s always bigger and better things. It’s just nice to know that I’ve got an entire team of guys behind me no matter what,” Johnson said.