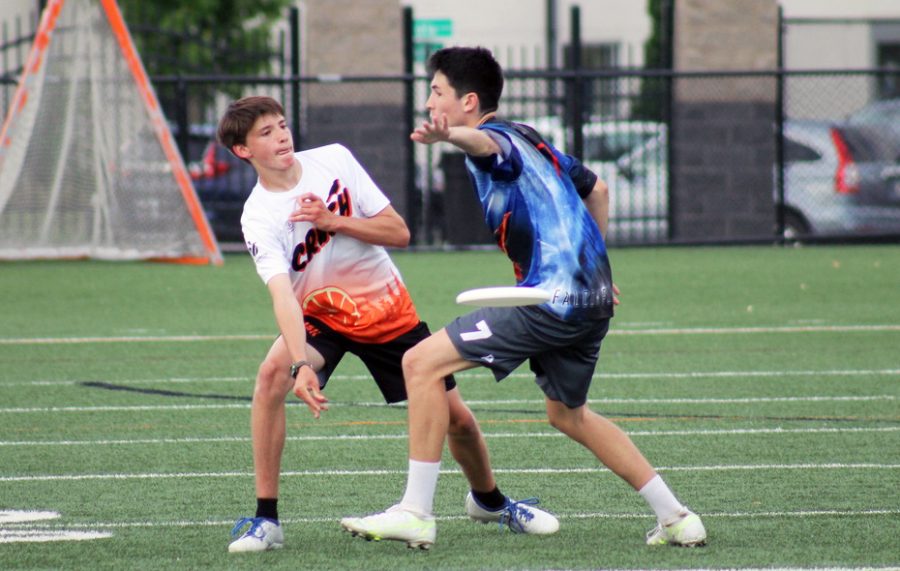 Freshman Thomas Shope releases the frisbee to one of his teammates June 3. The boys’ ultimate frisbee team beat Armstrong 15-9.

Despite struggling at the beginning of the game, assistant coach Eric Andersen said the team was able to come together and ultimately win 15-9.

“After the beginning (of the game), we put a lot of personal defense in there, and we kind of wore them down a little bit,” Andersen said. “After that, it opened up and in the second half we were able to take away some bricks and expand the lead and it was a really good game.”

The team will now move on to play Maple Grove in the conference championship. Junior Luke Walsh said he is hopeful the team can win their next game.

“It’s really exciting winning the conference semifinal,” Walsh said. “We’re gonna play the next team next week in the finals, we’re going to play them and bring intensity and win.”

In regards to preparing for the Section Finals, Andersen said being able to compete has been the main aspiration for the team this year.

“It’s great, it’s the goal of Crush so it’s where we want to be,” Andersen said. “I think it was one of our best years to be able to have that opportunity,”

In order to win their next game, junior Beau Finley said the team has to remain positive and continue to work as a team.

“We lost against White Bear Lake last week and that was a game that we definitely shouldn’t have lost, we should have taken that one easy,” Finley said. “I think it was just us getting back up on our force and it really just boosted the morale of the team to just take this win into the next game.”

Walsh said the sizable amount of fans at the game made the victory more meaningful.

“Every game is important, this one especially with all the fans and people watching, it was really fun and really exciting,” Walsh said.

After the first game of the season at the stadium, Finley said the atmosphere made the game more enjoyable for players and spectators.

“It was really awesome to see how many people came out and the turf is so much fun to play on, you can just get so much traction and everything,” Finley said. “I was really surprised by the turnout and it was a really big morale booster for us.”

When reflecting on the overall season, Anderson said the team’s energy has made it remarkable.