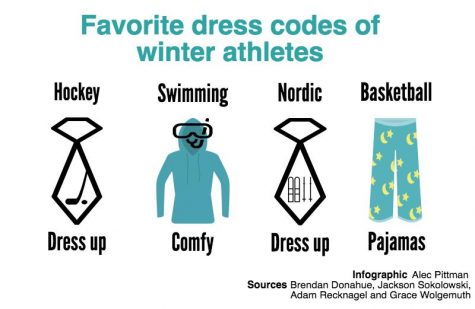 With an average of a game per week, the winter athletic teams commonly have dress codes for their day of competition, according to junior boys’ swimmer Adam Recknagel.

Recknagel said the dress codes he and the swim team take part in create a stronger team atmosphere while also showing an event takes place that day.

“I would say that dress codes add an element of team unity, especially if it is a more unusual one, and also draws attention to that there is a meet that day,” Recknagel said. “When I participate in a dress code, I usually feel closer to teammates, and sometimes even (feel) happier because a few of the dress codes can brighten up my day.”

According to junior hockey player Brendan Donahue, specific attire for each game allows him to better prepare for the competition.

“The dress codes add a further feeling of connection, teamwork and bond by wearing the same thing. It acts as a uniform much like our jerseys,” Donahue said. “Our dress code of dressing up adds a feeling of professionalism to our team and sport.”

According to junior girls’ basketball player Grace Wolgemuth, the clothes worn during each dress code show more about the team’s identity than often thought.

“I think dress codes are a great way to let people know that we have a game that day and it also helps with team bonding because it shows unity within the team,” Wolgemuth said. “I have a lot of fun with dress code, it makes me happy because we can have fun on game day.”

Senior nordic ski captain Jackson Sokolowski said the outfits chosen to be worn on meet days help notify fans of the competition, but unfortunately can exclude those not participating in it.

“I think the dress codes add a feeling of community among the team, and represents the sports (have games or meets that day),” Sokolowski said. “The takeaway is that some students can’t do all of the dress codes.”