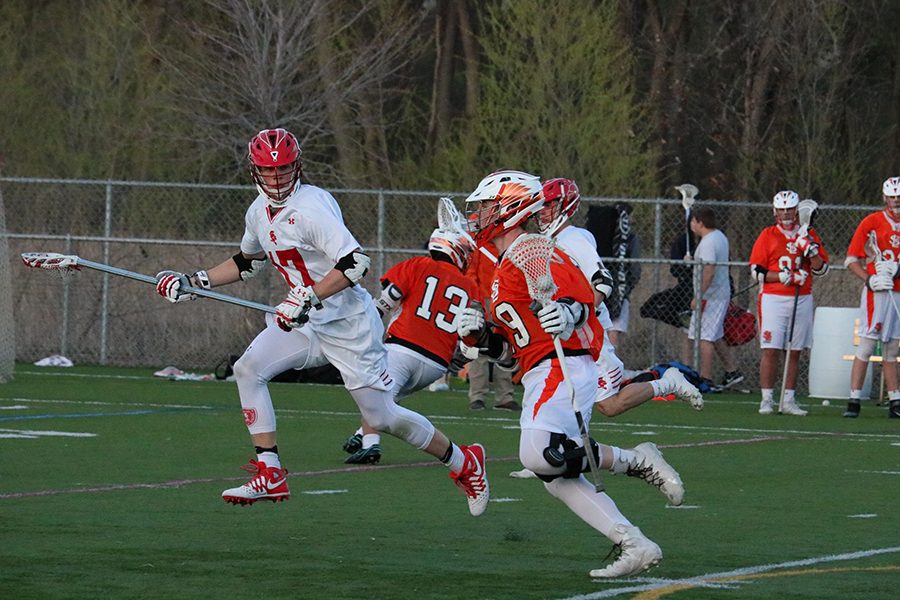 Senior Captain Brody Ilstrup carries the ball down the field in an attempt to shoot. Ilstrup scored 3 goals in Park's 19-4 loss against Benilde.

Senior goalkeeper Benji Wyberg faces off against Benilde players trying to shoot on him, a Red Knight gets past the defense and shoots but the ball is immediately caught by Wyberg’s goalie stick.

Following a 4-19 loss to Benilde St. Margaret’s, offensive coordinator Jon Carlson said the scoreboard did not portray how well the players performed.

“(The game) didn’t go how we expected but we had some good things, (and) some good individual things we can pull out of it,” Carlson said. “The scoreboard didn’t reflect how well we played, but I think we had some really good parts of the game but we didn’t put the whole thing together.”

Carlson said he saw a lot of good things from certain players who haven’t been on varsity until this year.

“The good things were a lot of guys who have never played varsity before and they really stepped up and made some big plays. Kyle Hedblom made some good plays and Dante Nord looked really good,” Carlson said. “For those guys it is their first year playing varsity, so it is really exciting to see them step up in something they have never really done before.”

Senior captain Brody Ilstrup said the team played well but needs to be more unified on the field.

“I think we really hustled out there, we really focused on team objectives which was defense last night and we really did well with it but we just have to communicate more and play more as a team,” Ilstrup said.

Ilstrup said he would like to fix small things as the season moves forward. 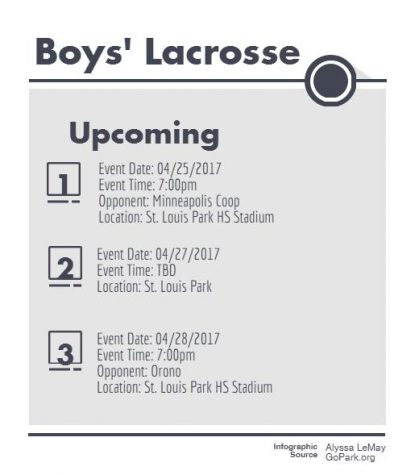 “As a captain, I really want to focus on the little things and try to go 100 percent the whole time and help other teammates who have questions and things like that,” Ilstrup said.

Senior defenseman Grant Plender said the team should improve on their defense skills for the upcoming games.

“I think defense just needed to step up a touch more, overall defense. The attack they did pretty good although they didn’t have many chances,” Plender said. “(Defense) can be more aggressive and physical, I think that would help.”

Plender said the team experienced some anxiety because of the opponent they were playing.

“I think there is definitely a little bit of nerves for Benilde just because it is Benilde and we wanted to beat them,” Plender said. “It definitely wasn’t scared nerves, I just don’t think we were as prepared as we should have been because of all the rain.”

The next boys’ lacrosse game will be at 7 p.m. April 25 at the St. Louis Park High School Stadium against Minneapolis Cooper.