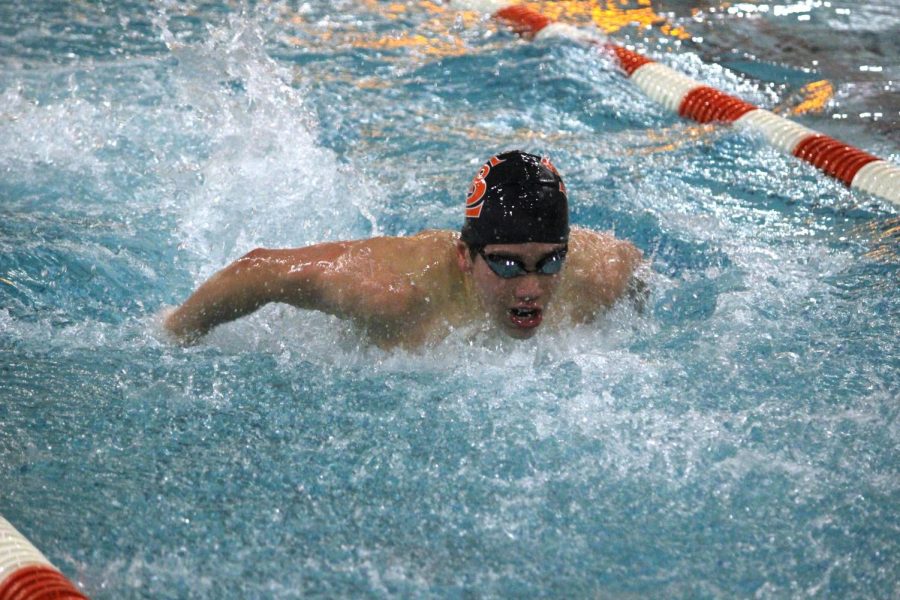 Freshman Hayden Zheng competes in his race during senior night, the final home meet of the season against Benilde on Feb. 2. Hayden broke the 100 backstroke pool record previously held by Chaska-Chan with a time of 00:53.85.

According to freshman Hayden Zheng, who broke the 100 backstroke pool record previously held by Chaska-Chan with a time of 00:53.85, the team felt very confident going into and coming out of the meet after its 63-30 victory over Benilde.

“We felt pretty confident. Forsberg, our coach, has always hyped us up and told us that we never lose to (Benilde). Our spirits are pretty high, just having some fun,” Zheng said. “We are feeling good headin 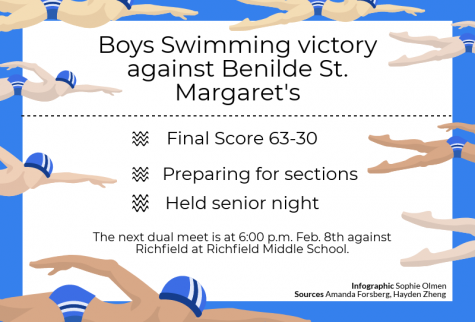 g into the championship meets.”

Head coach Amanda Forsberg said she is exceptionally proud of the seniors, and feels proud of the team overall.

“The seniors did really well I was really proud of them. They put a lot of hard work and effort into this season and it payed off, it’s nice to recognize and honor that. Everyone else did very well,” Forsberg said. “Going forward we’ll build up the yardage so varsity can taper off going into sections.”

On senior night, the last home meet of the season, senior captain Adam Recknagel said the team swam well with the exception of relay starts.

“(We could improve) relay starts, everything else seems good,” Recknagel said. “I could work on my breathing.”

Junior Jack Hanson said he felt certain the team would come away with a win.

“I pretty much knew we were going to win this one. Tonight I saw a lot of cheering and I saw a lot of positivity. It was amazing how we all came together as a team for senior night,” Hanson said.

Forsberg said the team is still looking to shave seconds off times as the team heads into Sections.

“We are still looking to get a little faster heading into Sections, and we are getting into the hard part of the season. It’s pretty grueling, but they just have to stick with it and we’ll be fine,” Forsberg said. “It’s the last chance we get to see anyone before we have to start tapering for JV and heading into sections.”

Junior Henry Hein echoed the sentiment of relay start improvement and said the team could better communication, planning and awareness.

“(We could improve) relay starts and overall awareness of what is going on. There were still some people who missed events,” Hein said. “We’re going to do some hard practices because we have varsity sections coming up.”

Zheng said the team is looking to relax and stay healthy while continuing to practice.

“(The team will) just rest and keep on training until the final moments,” Zheng said.

The next and final dual meet of the season is at 6 p.m. Feb. 8 at Richfield Middle School against Richfield.