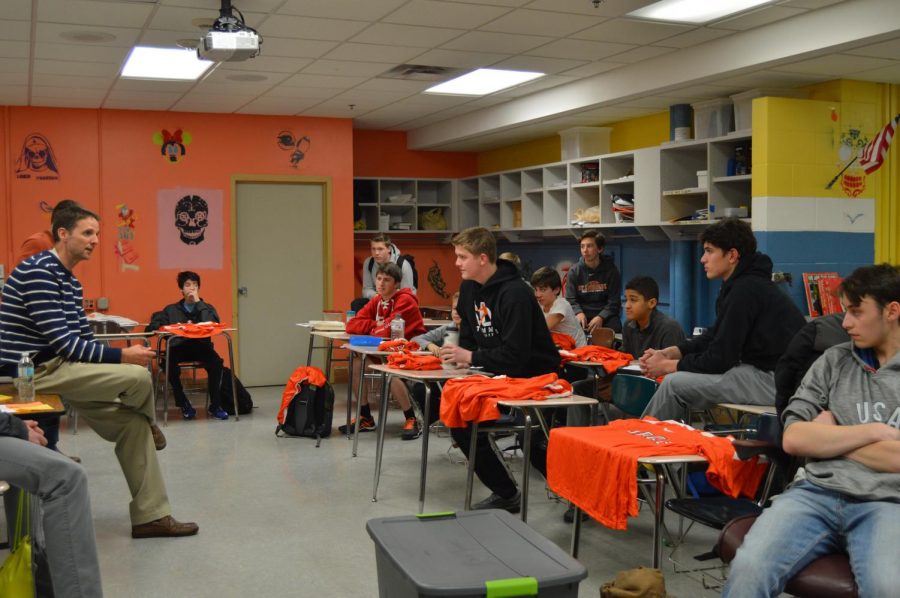 According to head coach David Breitenbucher the team has faced limited court availability due to snow, and other school’s tennis teams are in a similar predicament. Breitenbucher said he expects a slower season takeoff.

“Everybody is in the same boat. I’ve run into a couple other coaches and everyone is saying the same thing, unless your school has indoor courts your team can use everyone is in the same boat,” Breitenbucher said. “The whole season is going to be a slow start. It’s fun, only Minnesota weather can tend to create problems.”

Junior Isaac Schwartz said over his tennis career he has become accustomed to weather setbacks and is able to find a silver lining with indoor practice.

“Since it’s Minnesota I’m kind of used to it. It’s somewhat difficult just getting us all out able to play all at once. But it’s as fun as can be because you see everyone and get a chance to play with everyone,” Schwartz said. “I think that actually helps the coaches in a way because it gives them a bigger view of everyone playing against everyone else.”

Senior captain Adam Johnson said the lack of proper playtime for the whole team creates difficulty forming a game plan with matches starting so early in the season.

“Indoor courts around the city are frustrating because of the lack of availability these facilities have,” Johnson said. “Especially with matches starting next week and us needing to get our line set with tryouts, it makes everything tough in the shortened spring season.”

Breitenbucher said the team has been practicing in two different locations with limited court space, and on March 4 the team had only had 2 courts for 21 players.

“We’ve been to Lifetime and Reed Sweatt (InnerCity Tennis) in Minneapolis in The Bubble, we’ve been doing as much as we can on the indoor courts. It’s a pain in the butt,” Breitenbucher said. “It’s nice being indoors, you just can’t get courts because all the schools are fighting for court time. We’re doing drills getting as many guys rotating and in, whereas if practice was outside at our courts we would have seven courts.”

Senior captain Sam Birnberg said cost isn’t an issue, and everyone has still been able to make plenty of progress in practice.

“The athletic office usually has a budget for us and they pay for (our court time).” Birnberg said. “We worked on some conditioning, which can still use some of work for a lot of us, but overall in terms of technique and hitting a lot of guys are ahead of schedule. As soon we get conditioning done we’ll be good to go and have a good start for the season.”

Johnson said playstyle and variables in play are very different indoors and outdoors on the courts, and assured efforts made by the team ensures the capability of performance in either setting.

“Outdoors you have a lot more factors, the wind and the sun are two variables you just don’t have indoors, so it’s just a very different experience, but I’m confident we will be able to translate skills we have been working on this week when we transition outside,” Johnson said. (Tryouts) have been going well so far,” Johnson said. “I’m really excited for the season, we really have a strong team and we’ll be able to compete with a lot of schools this year.”

Schwartz said he is eager for the competition of the coming season and improving team synchrony.

“I’m looking forward to having time with the guys on the team winning some tennis matches. The team as a whole can work on our communication skills, I would say that for myself as well,” Schwartz said. “We just got to work on being like a team, playing like a team and cheering everyone on as a team.”

Breitenbucher said because of the snow, certain adjustments and positions the team may need to be made later in the season than usual.

“As a coach trying to look at guys and get an accurate picture of where people are at is so hard to do with limited courts,” Breitenbucher said “The lineups will be different, I’m not sure people are going to have the same lineup at the beginning of the year as they are at the end.”

According to GoPark.org, the team’s first match of the season is 4:00 p.m. April 11 at Fridley High School against Fridley.