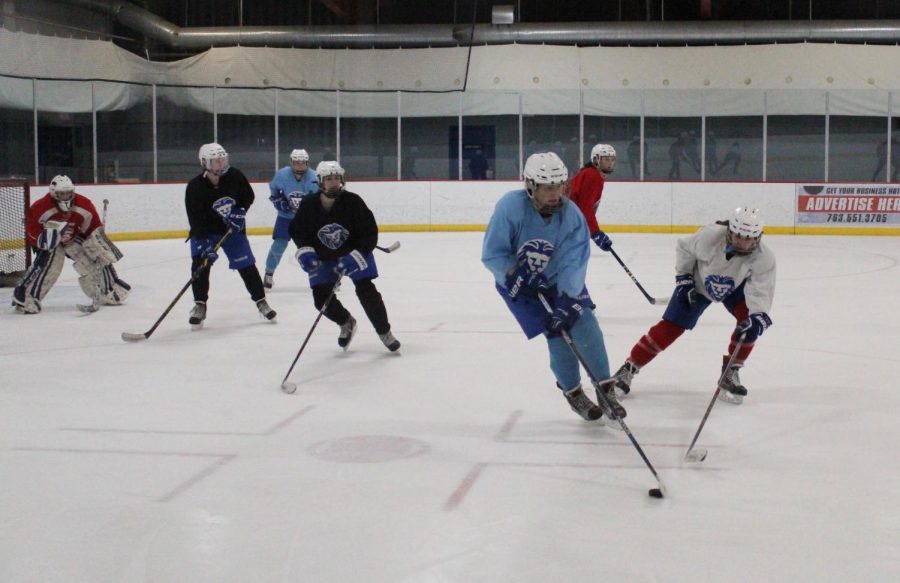 Freshman Erin Brousseau, in the white jersey, forechecks against Mary Gleason in the team's practice Feb 8.

Freshman Erin Brousseau said after talking with multiple schools about playing hockey after high school,  she chose to commit to Yale University because of the opportunities the school offers.

“It was kind of a long process. I was talking to a lot of different schools,” Brousseau said. “Yale became my number one school of all the schools I was looking at because of the academics and athletic opportunities and I really could see myself there more than lots of the other places.”

According to Brousseau’s coach Chris Erikson, Brousseau’s dedication to hockey has made her a crucial teammate.

“She is one of the hardest workers on and off the ice. She works on her individual skills on her own time as well.” Erikson said. “I see her as being a leader down the road for the squad and I think it is nice to put this behind her now and be able to focus on the little things in her game.”

Brousseau said she enjoys the group nature of playing hockey.

“I just really like the competitiveness of hockey and the team aspect and being part of a family,” Brousseau.

“She is strong, physical. I think that that is one of the things that these college coaches notice,” Erikson said. “Once you get out of high school the game gets a lot more physical and she can handle that at such young age already.”