Swimmers reflect on the year 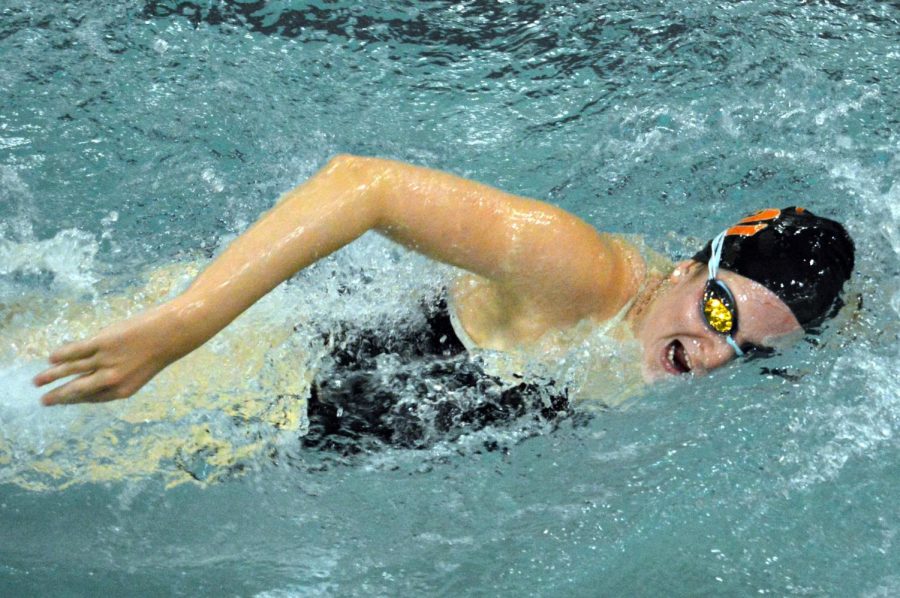 Senior captain Greta Kulevsky swim freestyle during a meet Oct. 8. Kulevsky has been swimming for Park for 5 years.

In its final meet of the season, Park competed at Sections Oct. 24. Girls’ swimming scored seventh out of thirteen places, which was a success in the eyes of multiple swimmers and coaches a part of the team.

According to sophomore Stella Rostal, sections ended up being a victory due to the entire team’s support of one another.

Assistant coach Lily Rostal said every swimmer made improvements from their last races.

“All our swimmers dropped time in their events. It couldn’t have gone any better,” Rostal said.

Senior captain Greta Kulevsky said the team has worked together to overcome the challenges of the season by increasing support, which helped with sections.

“Everyone is really good at cheering and is super supportive,” Kulevsky said. “Everyone on the team knows what we’ve been through this season with all the changes, so the support is so strong, especially during an important meet like sections.”

According to Kruse, leaving behind the younger swimmers will be one of the most difficult parts of graduation.

“I’m going to miss the whole team, especially the younger girls. I’ve grown close with them and am going to miss seeing them grow, get older and faster is so fun to watch. To feel like I had a part in that makes me happy,” Kruse said.

According to Kulevsky, the season coming to an end will make her miss the relationships formed and the routine of swimming.

Kruse said that as she thinks about her time being a part of girls’ swimming, she said she has many mixed emotions about moving on.

“The Park team has been such a big part of my life. The coaches are amazing and every year it gets better and better. The group has gotten more and more fun, which is unbelievable,” Kruse said. “It’s so sad to have it come to not the ending I expected last year, but I’m still glad I got to have a season for my senior year.”