Gymnastics hopeful despite loss against Hopkins 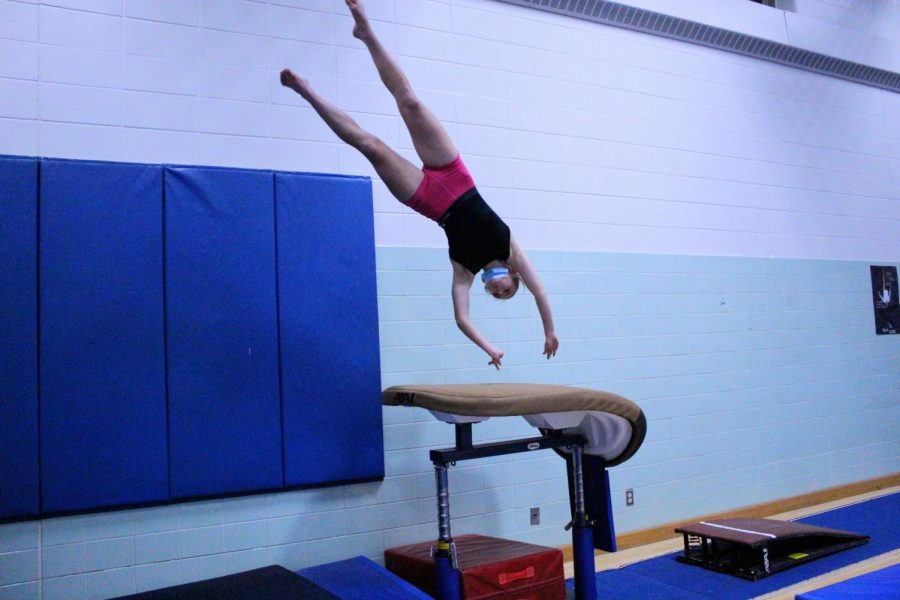 With the ongoing pandemic, athletes have had to adjust to safety precautions, which has changed the layout of many competitions. In their first meet of the season, Park lost to Hopkins. According to co-head coach Kelly Bergum, the meet brought a sense of normalcy to this season.

“I think it went well. I’m happy that the first meet was very similar to past meets, meaning it was with another team, at a different location and with the same rotations … it was very normal and we only have two new girls on the team, so they could feel that (sense of) competition and we scored like what we normally do at the beginning of the season,” Bergum said.

Senior and co-captain Maddie Olson said the team kept its expectations low and despite the loss, she feels like the team set a positive tone for the rest of the season.

“We were not really expecting to win because they have a lot of talented gymnasts, so we kind of went into the meet ready to just try our best, not expecting a big win or anything,” Olson said. “I think for the first meet, it actually went really well; we had a lot of girls put up some really good scores and start the season off on a good note.”

According to junior Lili Jampsa, Olson was not the only positive team member and the atmosphere was a source of light for many members of the team.

“I can’t even describe how amazing it feels to be able to even just smell the gym, the chalk, the cool air. We are all so excited, sometimes that’s the only thing we look forward to in our day is being in the gym,” Jampsa said.

Bergum said in order to adapt to the no spectators rule, the team created a Zoom call for parents to watch virtually.

“Generally, it’s all virtual because we can’t have any spectators, so even on last Friday’s meet, we set up a Zoom link and recorded the whole thing so parents could log onto that Zoom link and watch it live,” Bergum said.

Olson said many girls enjoyed the adjustment and relaxed nature of the meet.

“It was basically just two teams and the judges so I think a lot of girls, including myself, liked it because it took the pressure off and you weren’t competing in front of 150 people. It felt like a fun more laid-back atmosphere,” Olson said.

However, according to Jampsa, there have been a few downsides to the rules, which has taken some time to get used to.

“Without any spectators, it changes everything. It changes how we perform, our anxiety level, how much confidence we have and the environment. There is hardly any background noise besides teams cheering, and we need that background noise,” Jampsa said. “We don’t get to talk to parents, and we all loved talking to each other’s parents. No one can take videos of our routines anymore, cause who is there to do it? Having no spectators comes with pros and cons.”

While its first meet resulted in a loss, the team remains positive going forward.