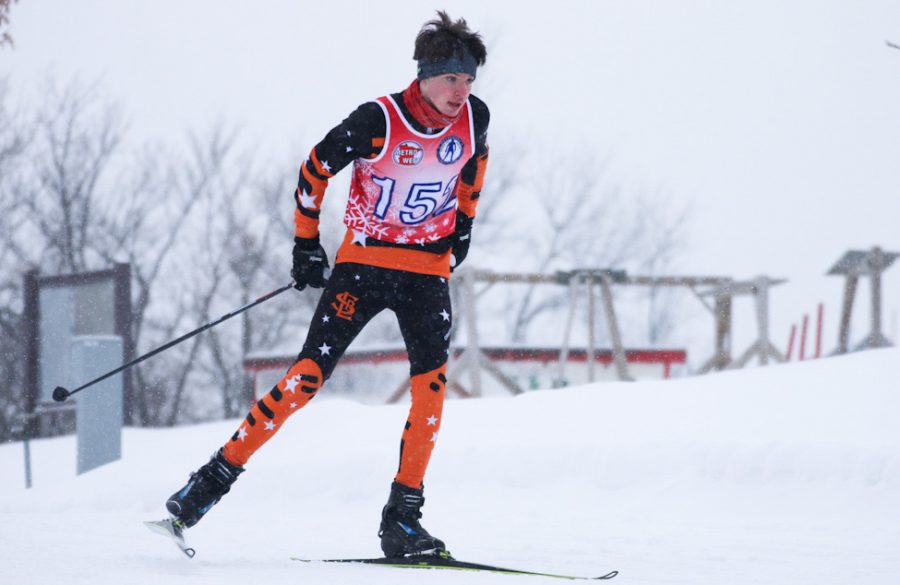 Freshman Thomas Shope glides on his ski Feb. 17. During this meet, Park swept all 4 races.

After winning all four races at its meet on Feb. 17, Nordic is feeling strong going into sections. According to senior captain Mimi Kniser, the team put its best foot forward to succeed at its most recent meet.

“Everyone was pushing themselves since it’s towards the end of the season. It was really good to see people trying their best,” Kniser said.

“We are definitely going to be working really hard on perfecting technique and getting a lot of feedback from the coaches,” Campbell said.

Assistant coach Pat Hartman said the frigid conditions have made it harder to get out and practice.

“It was kind of tough the last couple weeks because it’s been very cold; we’ve actually had to skip some practices,” Hartman said. “I know some of the kids have gotten out on the cold days, but the last couple weeks it was just trying to get out and ski when we could because of the weather.”

According to Kniser, resting has become the main priority, due to the season coming to a close.

“Since the only meets we have left are the conference championships and sections, we have already done most of the work,” Kniser said.

Hartman said making sure the team can stay safe and in shape is his goal to help get through sections.

“Right now it’s about keeping their fitness level where it’s at and everyone eating healthy, sleeping well, that kind of thing,” Hartman said.

Nordic will participate in its conference championship Feb. 22 for JV, and Feb. 23 for varsity.