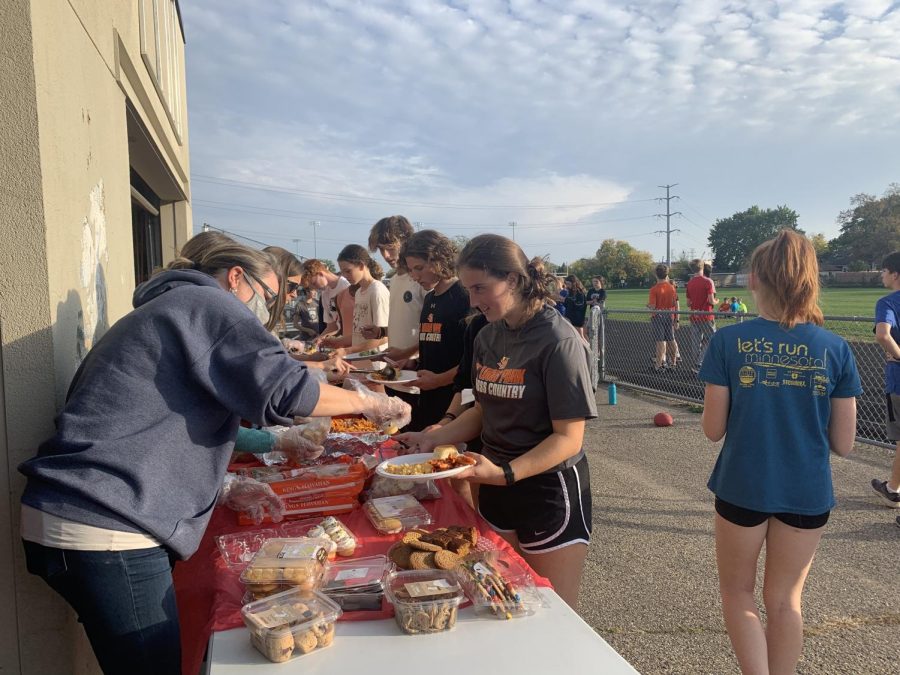 Junior Auden Whitlow gets food during a cross country pasta party Oct. 11. The team gathered in preparation for the Brookside Invitational which took place Oct. 12.

Pasta parties are staples for many teams to bond throughout its seasons. But after a year without them for cross country, junior captain Denly Lindeman said he felt less connected to his team.

According to head coach Chris Nordstrom, the cross country team was constrained to pods of a couple of runners. Because of these limitations, bonding became very difficult, Nordstrom said.

“I definitely feel overall coaches and team members are just closer because we’re able to spend more time together — we’re not broken into pods. We’re able to do some team bonding stuff, have some fun days,” Nordstrom said. “With the protocols and COVID(-19), we’re able to have a little bit more freedom outside. We don’t have to always be six feet apart and in groups. It’s definitely helped.”

For freshman runner Paige Descarpentrie, pasta parties provide a bonding opportunity different from just riding the bus as a team.

“It’s a good chance to talk with people about the race because (before the race) you can’t really talk. They [pasta parties] are important because I feel like (you can’t always) get that on the bus,” Descarpentrie said.

According to Lindeman, the runners are disappointed when they aren’t able to have a pasta party.

Nordstrom said although the pasta parties haven’t affected the team’s running the community is much stronger.

“I don’t think it’s had a huge difference in performance,” Nordstrom said. “But overall, I think our culture is in a way better spot.”