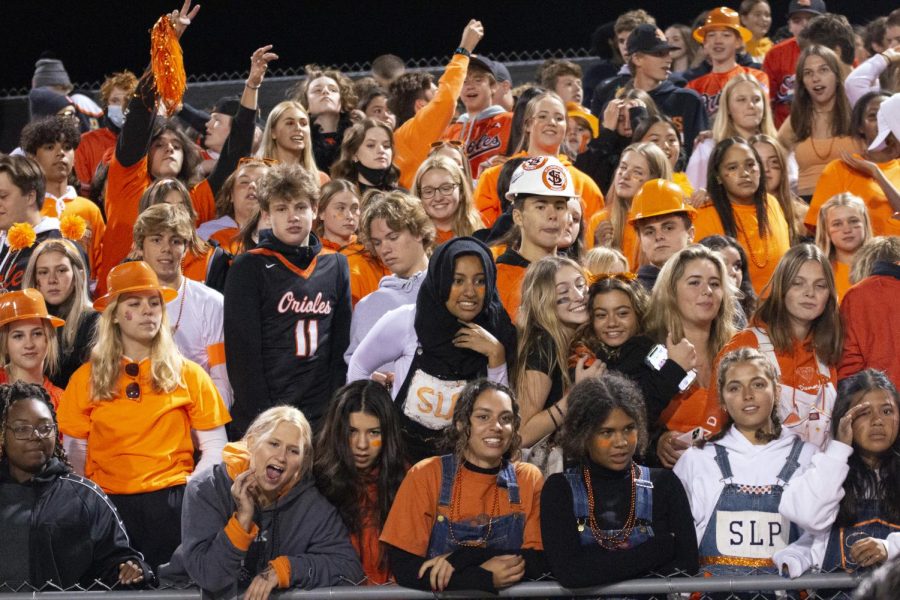 Students cheer on the football team at the homecoming game Sept. 25. During the pandemic, the absence of fans was missed by athletes.

“As an athlete, you can come with a certain mindset; you could be prepared but whether 10 or 200 people are screaming praises and cheering you on, it gives you that extra boost that you need,” Griffin said.

During the height of the pandemic, fan activity was largely hindered or prevented at sporting events. Strength and conditioning coach, Jessica Gust said the overall energy of games is based on fans and their reaction.

“We’ve had some games where the dynamic of the game shifted because of the crowd and the crowd was there to make that happen,” Gust said. “Last year COVID(-19) put a damper on everything, there was sort of a mood that put a damper on players.”

Junior football captain Henry Bendickson said football players depend on crowd reaction and it helps with lifting the mood, giving them an extra boost while playing.

“The student section this year has been incredible. I’ve definitely seen it boost in a lot of kids sports right now on the sidelines,” Bendickson said. “When they make a good play they look to the student section immediately, and they see the positive feedback that they’re getting from fans, it definitely boosts morale around the team.”

Senior football player Ezra Hudson the team owes its good season to the student sections support. The team has done a lot better this year, and will continue to do well if the support stays the same, Hudson said.

“Fans have been one of the biggest parts of our success, especially how hyped the student section always is,” Hudson said. “Our record completely flipped from last year. A big part of that is the fans.”

Other sports teams have felt this same effect with fans. Senior volleyball player Victoria Schmelzle said the volleyball team and other inside sports have benefited from having fans fill up the gyms and show support.

“In the gym it can feel really empty and echoey which makes it a lot harder to play. Its easier to concentrate when there’s stuff going on because you can focus on the game,” Schmelzle said.

“The fans this year helped us enjoy the game even more, to the point where having them there made it fun. Even if the game was difficult or annoying,” Guarin said.

Gust said not only is the bigger fan section helping players, it also helps students as connecting with friends and relaxing at sports events is a big part of the high school experience.

“Watching people be super social and interacting at the games as fans is a big part of a lot of kids social lives,” Gust said. “Especially kids aren’t in sports but love to watch them, those kids didn’t have much to do last year so it’s really fun to see that happening again.”

Griffin said he hopes the fan section grows even more and continues through the year so all sports can get the same support.

“I hope the support continues to grow through winter and spring and that we are able to make it out to all of our teams,” Griffin said. “They all need our support and I just hope we continue to see that.”