Volleyball loses in Sections to Edina 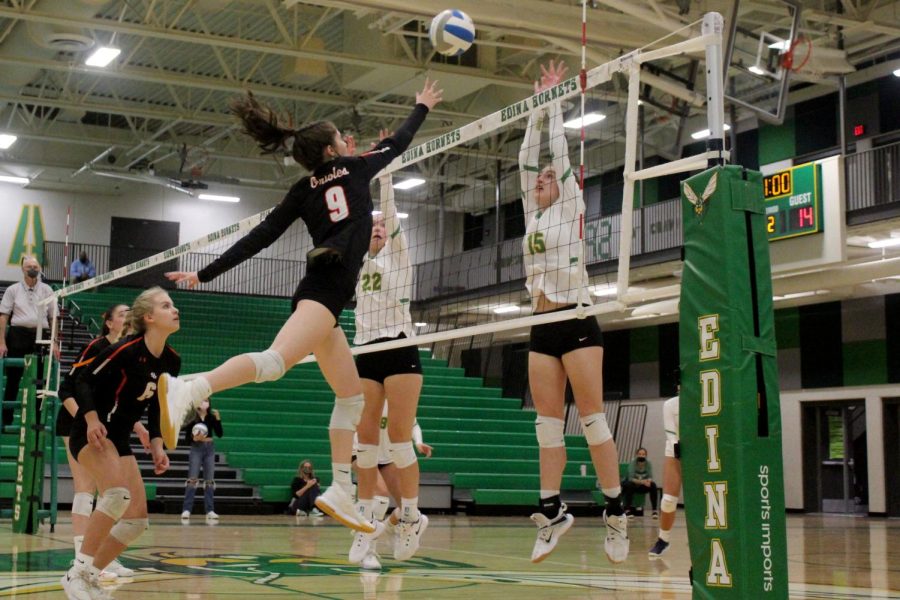 Senior Elsa Berglan hits the ball over the net at the sections game Oct. 24. Park lost 0-3 against Edina, ending their season.

After a long season, Park volleyball lost in three sets to Edina knocking them out of the section playoffs and ending their season.

According to freshman Amara Schroeder, the high stakes of the game on Oct. 27 made it different from past matches.

“Since I’m a freshman, I’ve never had this amount of pressure on me. Knowing that this could be our last game with the seniors made it even more difficult,” Schroeder said. “We were all really nervous and the whole team expected a different outcome.”

According to senior Sophie Chenvert, the team did its best to keep morale high even when things didn’t go as planned.

According to head coach Sam Hanlon, although they were losing, the team kept morale high and persevered.

“We didn’t quite play up to how capable we were, but I am really proud of them for never giving up and fighting for every point,” Hanlon said.

Chenvert said the team understood the importance of the game and practiced accordingly in the practices leading up to the game.

“We had a really good practice yesterday so it helped set us up to play well going into this game and this game was important because it was either going to be our last or we would keep going and building on to whichever game would be our last,” Chenvert said.

Hanlon believes that although the win-loss ratio was not ideal, the season still was a success in many ways.

“If we measure the season just on how much we improved and how we played as a team, I would definitely say this was a successful season,” Hanlon said. “Obviously, the wins and losses were not where we wanted them to be, but we definitely grew as a program and did what we had to do.”